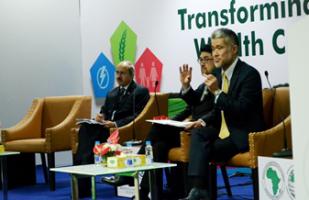 Though the government of Japan has announced allocating $7 billion during the Tokyo International Conference of African Development (TICAD) meeting in Nairobi kenya last year, so far only $2.9 billion is used, according to Mr. Moriyuki Aida, JBIC Executive officer for Europe, the Middle East and Africa.

“We announced a support of 7 billion dollars at the 6th  TICAD Forum in Nairobi. Out of this 2.9 billion is already committed. The rest 4.1 billion is remaining for future projects. Please consider utilizing the Japan’s facility for Africa investment and trade enhancement. As I said $4.1 billion is there for your future projects,” he said, at a panel discussion held at sideline of the 52nd African Development Bank annual meetings held in Ahmedabad, India last week.

In order to access the soft loan from the bank, the investment project has to be invested in an African country and has to also benefit
Japan. “If you create joint venture with Japanese company in India or Africa please contact us and find finance solution if you need. Our wish is
to support sales of Japanese equipment not only ‘made in Japan’ but also ‘made by Japan’,” he said.

Stating that Africa’s portfolio in JBIC is really too small with only 2.3%, Mr. Aida said that the Bank’s next focus is to invest more in Africa.

Because India has centuries old working relationship with Africa, Japan prefers African companies to venture with Indian companies in order to access JBIC’s finance, according to Fumio Suzuki, JBIC Chief Representative Office in Paris. “…But you [an African company] can
also directly access from JBIC,” he said.

At the panel discussion Mr. Taku Otsuka, Japan’s State Minister of Finance has also stressed the the importance of close collaborations
between Japan and india in order to vigorously contribute to the sustainable and inclusive development of Africa.

Securing natural resources for Japan improving international competitiveness of Japanese industries and responding to natural
crisis / disasters are the three major missions of JBIC, according to Mr. Aida.

Some of the existing financed projects in Africa and companies include, the optical submarine system in Angola, African Export-Import
Bank (Afreximbank), African Trade and Development Bank (TDB), which used to be called PTA Bank.