The African Development Bank (AfDB) Group and Ethiopia signed loan and grant agreements to the tune of $5.6 million on Wednesday for additional resources to Ethiopia’s One Water, Sanitation and Hygiene Program.

The Bank’s support focuses on the rural and pastoralist areas and is timely in the light of the drought that is being experienced in the horn of Africa.

In 2014 across Africa the Bank Group approved operations in the water supply and sanitation sector amounting to $390 million, including special funds transactions.

Speaking at the signing ceremony, Jennifer Blanke, Vice-President, Agriculture, Human and Social Development, AfDB, said, “These additional resources, at this juncture, are a clear demonstration of the AfDB’s commitment to support the efforts of the Ethiopian Government in improving the quality of life of people and sustainable inclusive development.”

These resources complement the initial funding of US $91 million extended to Ethiopia for the same project in September 2014.

Ethiopia’s Minister of Finance and Economic Cooperation, Abraham Tekese, commended the Bank for its quick reaction to the drought affecting the region, which could jeopardize years of development efforts.

The program envisages the construction and rehabilitation of 7,805 schemes. It will mean that 3 million people will get access to water supply and sanitation facilities. The project is located in all the nine regions of the country, across 177 districts where there are shortages of water which has affected the health of rural people. As well as addressing the lack of water and poor sanitation, the work will address the problem of diseases caused by water shortage such as typhoid and amoebic dysentery.

Ethiopians in rural areas spend a lot of time searching for water for domestic use and for livestock. In the dry seasons, in particular, people cover long distances (over 5 kilometres) to get to the nearest water source.

In rural Ethiopia, many women and children walk over 3 hours to collect water, often from shallow wells or unprotected ponds they share with animals, according to a survey by Water.org.

Recurring droughts result in famine, food shortages, and water-related diseases, as people are forced to rely heavily on contaminated or stagnant water sources. 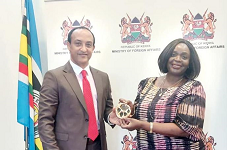