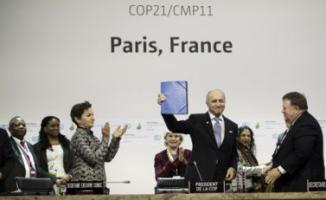 Reaffirming their strong commitment to full implementation of the Paris Agreement, the European Union and the African Union call on all partners to keep up the momentum created in 2015.

Ahead of the COP23 in November they pledge to work together to finalize the Paris Agreement work program. Climate change and renewable energy will figure on the agenda of the upcoming Africa-EU Summit in Abidjan on 29/30 November.

“This will be an opportunity to confirm the strong solidarity with those most vulnerable to climate change and the determination to work together to build strong and sustainable economies and societies resilient to climate change,” EU said in a press statement.

“The European Union and the African Union reaffirm their commitment to continuing to address the adverse effects of climate change on human and animal health, natural ecosystems and other social and economic impacts that threaten our developmental gains as a global community,” it said.

In a related development United States President Trump on Thursday said he plans to renegotiating aspects of the Paris Agreement. The United States signed the Agreement as one of the 195 countries during President Obama’s administration.

President Trump’s decision to withdraw the United States from the Paris Agreement will put poor countries at greater vulnerability, but it won’t stop a worldwide shift to renewables and a new climate economy, according to scientists at the Stockholm Environment Institute.

“We lose a step in building the inevitable renewable energy economy of tomorrow,” said Michael Lazarus, Senior Scientist and Director of the SEI U.S. Center. “Renewable energy is already out-competing coal and gas throughout the world, and the U.S. withdrawal won’t change that progress.”

Lazarus added: “China will seize the mantle. India too. They may move even more decisively to shift to renewables and electric vehicles. In the past year, they’ve cancelled dozens of new coal plants, and invested heavily in wind and solar, where prices are now competitive. We’re ceding the economic opportunity of the century.”

The Paris Agreement builds upon the Convention and – for the first time – brings all nations into a common cause to undertake ambitious efforts to combat climate change and adapt to its effects, with enhanced support to assist developing countries to do so. As such, it charts a new course in the global climate effort.

The Paris Agreement’s central aim is to strengthen the global response to the threat of climate change by keeping a global temperature rise this century well below 2 degrees Celsius above pre-industrial levels and to pursue efforts to limit the temperature increase even further to 1.5 degrees Celsius.

Additionally, the agreement aims to strengthen the ability of countries to deal with the impacts of climate change. To reach these ambitious goals, appropriate financial flows, a new technology framework and an enhanced capacity building framework will be put in place, thus supporting action by developing countries and the most vulnerable countries, in line with their own national objectives. The Agreement also provides for enhanced transparency of action and support through a more robust transparency framework.