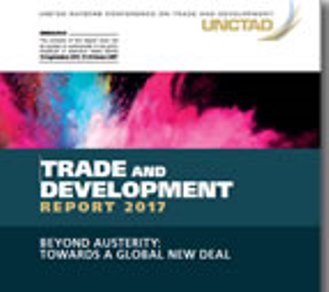 A new report of the United Nations Conference on Trade and Development (UNCTAD) calls for a Global New Deal to build more inclusive, sustainable and caring economies.

The three R’s original deal New Deal in the 1930s are as relevant today – combining economic Recovery with Regulatory reforms and Redistribution policies, according to  UNCTAD’s Trade and Development Report 2017 (TDR 2017) launched today in Addis Ababa.

Good lessons can be obtained from the previous successful global deals that followed the World War II such as, the Marshal Plan, the establishment of the International Monetary Fund (IMF) and the World Bank, according to the report.

“We received your message on global new agenda for the 21st century global economic recovery, reform and redistribution,” said Ambassador Albert M. Muchanga, Commissioner for Trade and Development at the African Union, commenting on UNCTAD’s report at the African Union Hall this morning.

“We are not too hopeful here. This is because the key players in the global economy are either not sending out clear messages on the future direction of the global economy or promising us isolationism,” he said, indicating that the world faces complex barriers to promoting broad-based inclusion in the development process.

“For many people and countries, the ladder of development is increasingly becoming difficult to climb as a result of those barriers. In some countries, women are facing the brunt of exclusion from employment on account of job rationing. With some aspects of globalization in retreat; with some economists already coming up with the term ‘physical de-globalization’ to describe this retreat, we have a huge task ahead in creating a new global deal for the 21st Century,” the Commissioner added.

The report stated that wrong footed macroeconomic policy and corporate rent-seeking behavior, as well as the emergence of smarter robots, among others are signaling for the need for a Global New Deal.

Hyper-globalization has fueled a significant rise in restrictive business practices and the rents such practices generate have led to rising inequality in a winner takes most world, according to TDR 2017.

“For us in Africa, we welcome initiatives to create a fairer and inclusive world order. But we are in the meantime, going ahead in creating our own future. We are inter-alia, harnessing our demography as a source of competitiveness by investing in our youth since Africa has the youngest population in the world,” Commissioner Muchanga said.