“The mission discussed recent economic developments and economic prospects with the Zambian authorities. Discussions also covered the main elements of the draft 2019 budget being currently debated in Parliament and the authorities’ policies and strategies for restoring fiscal and debt sustainability while maintaining growth,” said Mr. Ghura.

“These technical discussions are a key input in the preparations for the next Article IV consultation mission tentatively scheduled for early 2019,” he said.

Zambia’s stock of external public and private debt has been rising since 2011. At the end of 2014 it stood at 24 percent of GDP compared to 15 percent in
2011. An increase in the stock of external public and publicly guaranteed debt (PPG) of the central government (10 percentage points between 2011 and 2014) to a large extent reflects issuance of Eurobonds in 2012 and 2014 (3.0 and 3.8 percent of GDP respectively).

The share ofcentral government’s debt from multilaterals has fallen sharply (from 60 percent to 27 percent), while the share owed to private banks/investors has increased from zero to 46 percent.

Meanwhile, the stock of private and parastatal external debt has decreased from 7 percent of GDP in 2011 to 6 percent in 2014, according to the 2015 IMF assesment,which adviced Zambian  authorities to prudent fiscal and monetary policies, sustained debt management practices and deeper structural reforms to boost competitiveness, promote inclusive growth and accelerate poverty reduction.

The IMF staff has met with Minister of Finance Margaret Mwanakatwe, Bank of Zambia Governor Denny Kalyalya, other senior government and BoZ officials; members of Parliament; and representatives of the private sector, civil society organizations, and Zambia’s development partners.

The staff has expressed its gratitude to the Zambian authorities and the various stakeholders for the constructive spirit in which all discussions were held, according to Mr. Ghura. 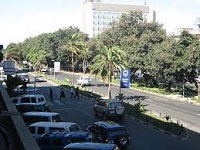