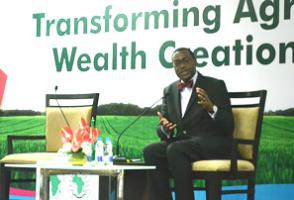 During the week long meetings concluded today, the two sister agencies have also reviewed and endorsed the Bank’s 2016 Annual Report. Over 3,500 top government officials, business leaders, representatives of NGOs, civil society, as well as members of the academic community have attended the meetings.

In addition, high-level meetings, symposiums and seminars on the Bank’s High 5 priorities – Light up and power Africa; Feed Africa; Industrialize Africa; Integrate Africa; and Improve the quality of life for the people of Africa – are also conducted.

The Governors acclaimed the robust net incomes recorded by all three windows of the Bank Group which far exceeded the achievements of the previous year.

The Governors (Ministers of Finance, Economy, Planning and, in certain cases, Central Bank Governors) representing the 80 member countries of Africa’s premier development finance institution, commended the Boards of Directors, Management and staff of the Bank for exceeding its lending and disbursement targets for 2016; and encouraged them to continue to strive to achieve more.

The Governors endorsed the Bank’s leadership in the transformation of African agriculture in the context of the global commitment to end poverty and overcome hunger and food insecurity.

“We encourage the Bank to continue to work with other donor agencies to crowd in financial resources, financing modalities and policy tools to unlock the potential of the sector and to fast-track the achievement of Africa’s agricultural transformation,” they said in their final communiqué.

The Governors expressed their appreciation of the Bank’s role in attracting more investment for youth in agriculture and the implementation of the Bank Group’s Jobs for Youth in Africa Initiative.

“In particular, we encourage the Bank to enhance its partnerships for enabling access to agribusiness as a driving force for agricultural transformation,” the Governors said.

The meeting also applauded the Bank’s role in the New Deal for Energy in Africa, which aims at providing millions of households with electricity by 2025.

“We encourage the Bank to continue to highlight the need for strong political will on climate change in this regard and in line with the 2016 Paris Agreement. Furthermore, we encourage the Bank to help leverage opportunities and overcome barriers, including access to finance to achieve transformation of the energy sector,” they said.

In his speech, AfDB President, Akinwumi Adesina thanked Prime Minister Narendra Modi and members of his government for providing appropriate structures and an excellent environment for the success of the meetings.

“To Prime Minister Modi, a very big thank you for hosting us and honoring us with your presence and for your very warm words: ‘Let us make history together for Africa,’” Adesina said.

He said that the Bank needed “bold optimism” backed by greater financial resources comparable to the kind of optimism that made Warren Buffet give US $30 billion to the Bill and Melinda Gates Foundation in 2006, to do more for the world.

“So, let ‘bold optimism’ from this Annual Meeting in India bubble and inspire us to accelerate financing, urgently, for the High 5s for Africa,” he emphasized.

Indian Prime Minister, Narendra Modi presided over the opening session on Tuesday in the presence of three African Heads of State – Presidents Macky Sall of Senegal and Patrice Talon of Benin, as well as Vice-President Daniel Kablan Duncan of Côte d’Ivoire participated in the ceremony alongside India’s Minister of Finance, Arun Jaitley, and the Chief Minister for Gujarat State, Vijay Rupani.