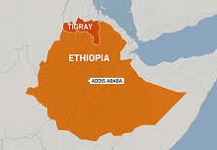 The Ethiopian Human Rights Commission (EHRC/Commission) stated that the slow progress of efforts to restore the infrastructure and to fully resume social and administrative services in Tigray Region is exposing residents and internally displaced persons to further human rights violations.

The Commission has released the findings of its monitoring and investigation mission in the region, which took place from January 10 to January 23, 2021. The mission talked to military and civilian leadership, as well as residents, health sector workers, affected persons and internally displaced persons in various temporary shelters in Mekelle city.

The Commission has received reports of loss of lives, bodily and mental injury, instances of gender-based violence, looting and other human rights violations including in the areas of Tigray which it has not been able to access yet. The continued disruption to many infrastructural and other services, including banking, has limited the movement of food, medical items and other basic goods. It has also hindered the full resumption of health services and law enforcement.

In the past two months alone, 108 cases of rape have been reported in Mekelle, Ayder, Adigrat and Wukro hospitals. While the Commission has noted some improvements in terms of provision of humanitarian assistance in Mekelle and other areas that it has visited, significantly more effort is still required to meet the extent of humanitarian need on time.

People displaced to Mekelle from other parts of the region still face a shortage of food, clean water and insufficient provision of health services. The ongoing security situation in some parts of Tigray and ongoing disruption to health services has forced injured persons and families of injured persons to walk long distances to get medical help.

When the Commission visited Ayder Hospital’s in-patient wing for children, 16 of the 20 children being treated for trauma had sustained injuries as a result of the war. Some of the hospitalized children have lost at least a body part or suffered another form of bodily injury. Medical professionals also confirm that one of the main reasons for injuries to children in particular are “land mines and hand grenades left lying on the ground”.

EHRC Chief Commissioner Daniel Bekele has said that “While there are many indications and reports of the scale of human rights violations occurring in Tigray Region, the comprehensive overview of the full extent of its impact on civilians is still hindered by the security situation. The Commission will continue its monitoring work and carry out investigations.

”While reiterating the Commission’s previous calls with regards to the loss of lives and internal displacement resulting from the war, he strongly urged for “a more focused and immediate action to put a stop to the alarming and deplorable human right violations caused by gender-based violence and injuries to children.”

Please find attached EHRC’s brief monitoring report ‘Current Situation of Residents in Tigray Region’. Ethiopian Human Rights Commission (EHRC) is an independent federal state body established by Parliament in accordance with the Federal Constitution as a national human rights institution with the mandate for promotion and protection of human rights.