Despite the global financial crises, banking business in Ethiopia is booming. Four new banks are currently under-formation while the existing ones continue announcing profit increment every year.

Debub Global, Enat, Addis Cooperative and Abay banks are offering shares to the public to join the promising sector. Two new banks, Berhan and Bunna also began operation few months ago increasing the total number of banks in the country to 15, out of which three belongs to the government.

On the other hand, both state and private banks in the country do not seem to be affected much in the face of global financial crisis and domestic inflation, which limited their lending capacity.

For the fiscal year ended June 30, 2009, the biggest state bank, Commercial Bank of Ethiopia (CBE), has made a total profit of 1.3 billion birr (103 million USD) in six months. The profit increased by 80 percent compared to that of the same period of the previous year.

From the private bank side, the biggest one in the category – Dashen Bank reported that its annual revenue has reached 250 million birr (around 19 million USD) from the 239 million birr it was the previous year.

“Ethiopian banks are able to escape the global financial crises and the business is becoming attractive mainly due to two reasons,” says Mohammednur Behru, Analyst at Access Capital, a research and equity investment company based in Addis Ababa.

“The first one is that investment in banking sector is limited to Ethiopians and they are not that much linked to the international financial system. The second major reason is that Ethiopia is one of the under-banked countries of the world. Among other things, these factors make the sector safe from the global financial crises and makes it attractive to for potential investor,” Mohammednur says.

The banking system of the country is mostly limited to inter-bank transaction with foreign banks. It will not allow people to withdraw or transfer money in hard currency from their local accounts’ to another country’s bank account though there are some schemes like import guarantee and travelers’ check.

With regards to ratio of bank coverage to the population size, Ethiopia is one of the under-banked countries in Sub-Saharan Africa. Currently 617 bank branches are serving the 79 million total population of the country.

According to the information obtained from the National Bank of Ethiopia, which regulates the sector, currently one branch bank serves around 130,000 Ethiopians. This figure will drop to 14,000 in Tanzania, 31,000 in Kenya and 70,000 in Uganda.

It was in November 1994 that Awash International Bank S.C. was established as the first private commercial bank in Ethiopia. Like telecommunications, Ethiopia has not yet opened banking sector to foreign investors. 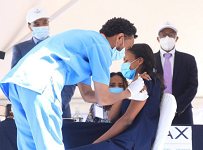