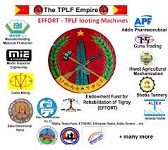 The Office of Federal Attorney General of Ethiopia today blocked 34 bank accounts of the companies owned by the Tigray Peoples Liberation Front (TPLF).

In Ethiopia all the four members of the former ruling coalition Ethiopian Peoples Revolutionary Democratic Front (EPRDF), which is united recently as Prosperity Party, owns businesses including Tiret Corporate of Amhara party, Dinsho, Wondo, and EFFORT. Meanwhile after TPLF recently decided to not to be part of the united party )Prosperity), EFFORT was out of the supervision of the ruling party.