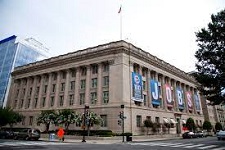 The event took place during the week the U.S. Chamber’s U.S.-Africa Business Center hosted official delegations from South Africa, Kenya, Nigeria, Ghana, Tunisia, and Congo. The MOU with the Tanzania Trade Development Authority will build business linkages between the U.S. and Tanzania through the countries’ mutual commitment to share investment and trade information, co-host events including public- and private-sector trade policy dialogues, and collaborate on trade and investment forums and conferences, among other measures.

The signing was witnessed by President Hassan of Tanzania and U.S. Chamber of Commerce President and CEO Suzanne Clark, and comes amid the Chamber’s deepening work in facilitating commercial opportunities in both the African and U.S. markets. The U.S. Chamber’s leadership in advancing a forward-leaning Africa policy will be further on display when the Chamber looks to play a role in the Biden-Harris Administration’s forthcoming U.S.- Africa Leader’s Summit.

As U.S. Chamber President Suzanne Clark expressed in her remarks, “The caliber of businesses taking part in today’s roundtable demonstrates Tanzania’s upward trajectory as an international business partner and investment destination. The Chamber additionally hosted signings for new private-sector investment and public- private partnerships in Tanzania worth at least $540 million. And all told, about $1 billion worth of deals will have been signed or announced during President Hassan’s trip to the U.S. over the past week. We believe this is just the beginning of what is to come.”

The U.S. Chamber of Commerce is the world’s largest business organization representing companies of all sizes across every sector of the economy.