African countries are advised to embrace artificial intelligence based new technologies including Blockchain financial technology, instead of banning because the countries don’t have regulatory frameworks in place.

“Ubber do not own any vehicle here, they can walk out any time like they came. The world’s biggest media company (facebook) produces no content. We are the one who produce that content but they make the money. So our biggest problem is failure to understand emerging business models. If we understood these emerging business models, then we can play at a level playing field,” said Professor Elijah Bitange Ndemo, of Nairobi University and Senior Advisor to UN’s Global Pulse big data initiative.

“They are not here to collect the money like we are collecting now. They changed their business model and they continue to change…We are going to see more companies using these business models and completely taking money out of our country. We don’t know how to recover that,” he said.

To deal with disruptive business models like Ubber and Facebook, he suggested that African countries need to first understand data, which has been changing overtime. “Things have changed. We are now beginning to move very close to diagnostics where we look at what happened and why at any time, so that we block that,” he said.

“We can even move further to predictive analytics about what will happen, when and why. So that you can block before everything is gone wrong. Once you understand that you can simulate that. So that you can prevent anything from happening even without you being there,” Professor Elijah said, stressing the need for African governments to fist understand the business model instead of rushing to ban such artificial intelligence based businesses or coming up with regulatory frameworks.

Commenting on Blockchain, which uses digital currencies – Cryptocurrencies, the technology can help stop illicit financial flows by bringing transparency into every financial transaction.

He noted that data analytics is important for tax authorities…to negotiate with fin tech companies such as, Ubber by getting the date from the driver “…That is why we need data from everybody…including those in the informal economy and sell tomatoes on the street,” he said.

But to benefit from the technology Africa countries must provide digital education to their citizens at all levels including, social media, according to Professor Elijah. “Every country in Africa must have a digital learning program. Because the jobs we have now will change. The new jobs that will come we don’t even know their names. But more jobs are going to come,” he said.

In many African countries including Ethiopia, the use of digital currencies such bitcoin are illegal. Not having proper regulatory frameworks and laws that govern digital currencies is among the reasons the countries use as an excuse to ban artificial intelligence based businesses.

“We should allow innovation to take place and then find regulatory framework,” he said, explaining the experience of MPesa in Kenya.

“We let M-Pesa to operate where we don’t have any regulation at all. Some people said this company is going to take money of this country. But we (government) said let’s wait and see what we can do about it. Now mobile money is regulated in Kenya… We should in Africa jump in to Blockchain and take the leadership” he said.

On the issue of privacy he stated that for the good of humanity some data of individuals have to be shared in big data such as health. 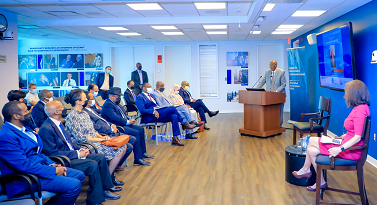