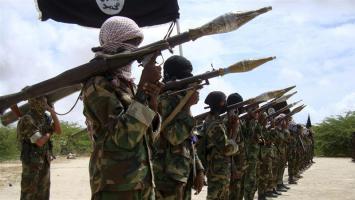 The United Sates government said its forces have conducted a precision airstrike in southern Somalia on Sunday. Eight al-Shabaab militants killed in the strike, according to the press statement of the U.S. State Department.

The militants were operating an al-Shabaab command and logistics node at a camp located approximately 185 miles southwest of Mogadishu in a stronghold for the al-Qaeda-affiliated al-Shabaab organization.

“U.S. forces, in cooperation with the Government of Somalia, are conducting operations against al-Shabaab in Somalia to degrade the al-Qaeda affiliate’s ability to recruit, train and plot external terror attacks throughout the region and in America,” said the press statement of the U.S. State Department.

The terror organization has taken advantage of safe haven, according to the statement.  The group has cemented its control southern and central Somalia, they have used this area to plot and direct terror attacks, steal humanitarian aid, and to shelter other radical terrorists.

The statement noted that U.S. forces will use all effective and appropriate methods to protect Americans, including partnered military counter-terror operations with AMISOM and Somali National Army (SNA) forces; precision strikes against terrorists, their training camps and safe havens; and hunting and tracking members of this al-Qaeda affiliate throughout Somalia, the region and around the world.