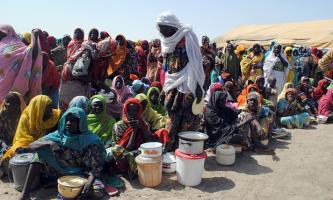 The donation made by his foundation is part of an effort aimed at complementing government’s humanitarian intervention to bring reliefs to the victims of insurgency and other IDPs.

He said he had always felt for those in the IDP camps and that the donation became more urgent given that it is Ramadan period.

The business mogul who made the donation of the items through his Foundation, The Aliko Dangote Foundation, pledged that he would be willing to complement any government efforts designed to ameliorate the suffering of the IDPs anywhere.

Chief Executive of the Foundation, Zouera Youssoufou, who made the donation and distribution of the food materials on behalf of Dangote, explained that the gesture was part of the Foundation’s humanitarian efforts contributing to the well-being of Nigerians in need.

“This gesture is in continuation of the Group’s efforts to provide succor to Internally Displaced Persons in Borno State”, she stated.

According to her, the decision to bring down to Borno the food items was the demonstration of the Foundation’s undertaking “to ensure that the IDPs also have a successful Ramadan period just as their other Muslim counterparts in other parts of the world. ”

“The Foundation is providing food items worth N200 Million to support the IDPs in the state. Today, the Items the Aliko Dangote Foundation have delivered include: Rice, Spaghetti, Sugar, Salt, Millet, Maize, Noodles, Semolina and Wheat Meal”, she said.

[embedyt] https://www.youtube.com/watch?v=SN840V2KkLg[/embedyt]The Governor of Borno state, Alhaji Kashim Shetima, who formally flagged-off the distribution, thanked the Dangote Foundation for its continuous support to the people of Borno state, epecialy to the victims of insurgency.

Said he, “words are not enough to describe how grateful the people of Borno are to Alhaji Aliko Dangote and his Foundation, who has relentlessly come to support and share in our plight in our time of need.”

He asserted that since the inception of the insurgency, the Dangote Foundation remains the largest single individual donor to the IDPs in the state after the Federal and State governments.

Also, the Executive Chairman of the State Emergency Management Agency, Engr. Ahmed Satome, said that the Dangote Foundation is unique in the sense that it provides all classes of food required by the IDPs in line with the global acceptable standards.

While commending the efforts of the Foundation, he said that a total of 371,000 individuals will benefit from this Ramadan intervention.

It would be recalled that following the report, earlier of unhealthy conditions in which the IDPs live in 2016, Alhaji Dangote visited some of the camps and his Foundation made a jumbo donation of N2 billion and hundreds of millions of Naira worth of food items.

Within a spate of five years, the total amount donated to various camps of IDPs, across the country by the Dangote Foundation has grown significantly to N6.3 billion. The Foundation donated N364 to IDPs in Kaduna, Bauchi and Gombe states after the 2011 post-election violence which rendered many homeless, while in another breath the sums of N100 million and N60 million were respectively donated to victims of flood disaster in Lagos and Oyo State also in 2011.

South Sudanese refugees set to get new shelter in Ethiopia