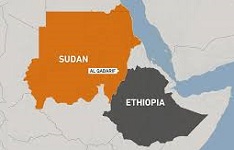 The Ministry of Foreign Affairs of Ethiopia today calls on African countries to advice Sudanese Government to finalize its border dispute with Ethiopia peacefully.

“Ethiopia calls upon brotherly African countries to advice the Sudanese government to finalize the border issues through available mechanisms in peaceful manner,” the Ministry said today in its press statement. The statement also urged Sudanese people to check on its government, which is serving the “interest of third country”. But the statement didn’t mention the third country by name. “…the Ethiopian government would like to call upon the people of the Sudan to check on its government from serving a third party interest which only would result in the determent of the two nations,” it said.

“Ethiopia while reiterating its commitment for a peaceful settlement of the boundary issue, once again calls upon the Government of the Sudan to reverse the aggression, desist from provocation and resort to a peaceful settlement of the boundary issue,” the statement said. The Ministry in its statement reiterated its stand to resolve the border conflict peacefully condemning the occupation of Ethiopia’s territories by the Sudanese army.

“The Ministry of Foreign Affairs of the Federal Democratic Republic of Ethiopia condemns in the strongest possible terms the escalation and provocative behavior of the Government of the Sudan regarding the boundary issue between Ethiopia and the Sudan. Ethiopia believes that any conflict between our two countries would only result in a colossal collateral damage and jeopardizes the well-being of the two nations. Therefore, the Ethiopian government strongly believes that the conflict being trumpeted by the Sudanese government’s military wing could only serve the interests of a third party at the expense of the Sudanese people,” it said.

“It is to be noted that the two governments have sufficient mechanisms to deal with any claims and counterclaims of the border or any territorial claims. However, the Sudanese National Army violated the basic principles of international law and peaceful settlements of disputes by unceremoniously invading Ethiopia in early November 2020. In doing so, Sudan has violated the bilateral boundary agreements, which stipulate non-displacement of nationals of either nation from their farms jointly registered by the two Governments, the status quo of which shall be maintained until the disposition of the case by an agreement.“

“The Sudanese side has also overturned and undermined the efforts of the joint boundary committees that have been making tireless efforts to finalize the re-demarcation process of the common boundary. Contrary to the spirit of friendship and cooperation existing between our two brotherly countries, the Sudanese Army looted properties, burned camps, attacked and displaced thousands of Ethiopians and controlled vacated Ethiopian Military Camps.”

Media reports show that the Sudanese army has entered some 40 kilometers into Ethiopian territory last November when Ethiopian army was fighting with the Tigray Peoples Liberation Front (TPLF) militia, which was defeated by the army within about a month.

“What is more deplorable is, in an apparent misrepresentation of the facts on the ground, Sudan is deliberately engaged in misinformation campaigns against Ethiopia by accusing the victim as an aggressor, evading accountability by shifting blame and camouflaging its belligerence and continue its provocation in an attempt to control more lands,” the Ministry said.

“Amidst of all these escalatory and provocative behaviour of the Sudan, Ethiopia has shown a great deal of patience, remained restrained from exercising its legitimate right of self-defence and time and again expressed its commitment to a peaceful settlement of differences regarding the boundary through existing bilateral agreements and joint border mechanisms. What is needed is a political will of the two governments, which would enable them reach at an amicable solution.”

“Ethiopia firmly believes in the long standing fraternal relations between the people of Ethiopia and Sudan regardless of the nature of their respective governments. The attempt being made by the Sudanese Army to push the friendly peoples of Ethiopia and Sudan to unwarranted war is a serious blunder that will undermine their peace, stability and development of the two nations in particular and the region in general.” the statement said. 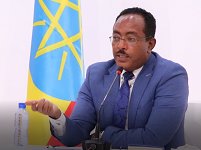