By Andualem Sisay Gessesse -The government of Ethiopia has arrested 36 people accused of running hidden prisons across the nation and committing crimes against humanity as well as 27 accused of robbing wealth of the nation.

“For the past five months we have been gathering evidences on those people involved in crimes against humanity in different parts of the country,” said Attorney General Berhanu Tsegaye, who stated that there are still individuals hiding in the country and abroad involved in the crimes.

Committing gang rapes, sodomy in unregistered prisons, using forbidden techniques of tortures, denying sunlight, prolonged exposure to heat and killing prisoners, are among the crimes against humanity the suspects have committed, according to Berhanu, who briefed journalists in his office on Monday.

He stated that in Addis Ababa there were seven unregistered prisoners where the crimes were committed, while similar crimes have also committed in other parts of the country, mainly by the intelligence people.

He noted that among the purposes of these tortures were to make suspected prisoners accept that they have committed crimes as well as force some politicians leave office.

For many years international rights groups such as Human Rights Watch have been issuing reports about the crimes against humanity in different parts of the country, which the regime has been denying.

In relation to Prime Minister Abiy’s assassination attempt, the attorney general has indicated that it was orchestrated by the former intelligence head of the country, but not by the institution.

Currently those who throw made the bomb attack are in prison for their direct involvement. The attorney general says they were investigating those behind the attack and finalized their investigation, which led to the former intelligence head of the country.

Getachew Assefa who lost his position after Prime Minister Abiy came to power, was Ethiopia’s former intelligence head whose face was still not known by the public.

Currently Mr. Getachew is based in Mekelle and he was recently appointed as security head of Tigray Region and member of the central committee of Tigray Liberation Front (TPLF).

Responding to the question if it was going to be difficult to arrest the former intelligence head and now security head of Tigray Region, Attorney general Berhanu said: “Let alone a security head of a region, even if he is a president or leader, he is not above the law… We all are below the law”.

As these crimes allegedly committed are internationally outlawed crimes by the international laws Ethiopia is signatory, the government is currently discussing with different countries to bring those hiding abroad, according to the attorney general.

The TPLF has been the most powerful group in the ruling coalition (Ethiopian Peoples’ Revolutionary Democratic Front – EPRDF) since the former rebel group took power in May 1991 forming the current rulling coalition.

But after the coming of Prime Minister Abiy, who is from the Oromo Democratic Party – one of the four member parties of the ruling coalition- the dominance and influence of TPLF within the EPRDF has been diminishing.

Robbing wealth of the nation
The attorney general has also stated that additional 27 former army officers, their business associates and brokers allegedly involved in illicit financial out of the country by abusing their duties and responsibilities and corruptly running a military enterprise know as Metal Engineering Technology Corporation (METEC).

He stated that in seven years period from 2010/11 to 2016/17, the military generals and officers in charge of METEC and their affiliates have made purchases of over $2 billion often with up to 400% inflated / exaggerated price on products and services purchased.

It is indicated that most purchases were made from China and Malaysia through their brockers who have blood ties with the military generals and offciers. As a result the accused officers and their allies have stashed huge amount of money abroad including assets such as, companies. They are also accused of making the purchases with similar companies without proper bidding process, which is against government rules and procedures.

Speaking about local transactions METEC has done, the attorney general has also stated that those transactions worth several billions of dollars were also conducted with family members of the officials at METEC and their relatives as well as people who have direct business relations with them.

METEC has been involved in mega projects ranging from military equipment manufacturing and maintenance to Ethiopia’s multi billion dollars dam construction on the Nile and several sugar factories.

Among the crimes the military officers in charge of METEC also includes purchasing and using two ships without the Ethiopian flag and conducting illegal businesses between Mogadishu and Iran. They are also accused of purchasing old-rundown five gets from Israel of which the government doesn’t know the whereabouts of one.

To arrest the remaining involved in both crimes against humanity and nation robbery, the government will reveal the pictures of the suspected soon to get assistance of the public and capture them, according to the attorney general. 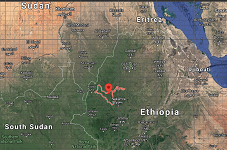