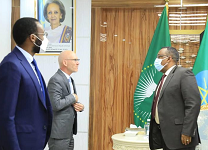 The two sides exchanged views over the election in Somalia, the reform process of the AU peacekeeping force in Somalia (AMISOM), and the need to stem the terrorist acts of al-Shabaab, according to the statement from the Ministry of Foreign Affairs of Ethiopia.

The Deputy Prime Minister told the special envoy that Ethiopia, as a friendly country, has been closely following the election process in Somalia, further expressing delight over the peaceful manner that the process has been undertaken.

Speaking on Al-Shabab, the Deputy prime Minister and Foreign Minister said cooperation is indispensable to prevent the group’s attempts to exploit the election process in Somalia and the drought in the area to advance its terrorist acts destabilizing the region.

The two sides also talked about the reform process in AMISOM and the role of troop-contributing states. AMISOM was created by the African Union’s Peace and Security Council on 19th January 2007 with an initial six month mandate. 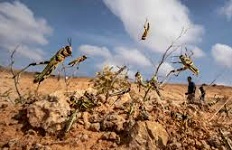