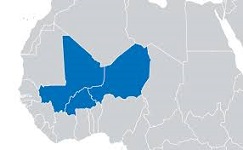 BY MABINGUE NGOM- It is now a decade since the Sahel crisis unfolded. Yet, the region has picked up the hard lessons and remains of interest globally. At the onset of the last decade in 2011, the security situation in the region had degenerated, leading to mass migration and the displacement of some 2.5 million people in the region.

To the mass media, issues leading to this displacement of people stems from insecurity, which has, in turn, spawned the rise of extremism, political intolerance, societal fragmentation, communal strife, mass migrations and triggered a massive humanitarian crisis while claiming several thousand fatalities.

The Sahel has had the unfortunate task of shouldering the burden emanating from the repercussions of the civil strife in North Africa, especially Libya. Moreover, the escalation of Jihadists movements has also undermined Sahel’s development trajectory. Added to this crisis burden are the high poverty levels, inequality ratios, drought alongside other natural climate change-induced hazards, COVID-19 pandemic and demographic pressures contributing to Sahel’s woes.

This has become the signature definition of this part of Africa, as illustrated by the mass media.

Nevertheless, this is only one part of the coin that is the Sahel.

The second side of Sahel’s coin is its burgeoning population.

The UN World Population Prospects 2019 notes that out of the world’s 20 youngest countries, 19 are in Africa, with Niger topping the list. As of 2020 the region’s population, had bulged to 414 million people straddling across more than 20 countries.

According to the World Bank, the combined population of the 23 countries in the Sahel and Equatorial Africa is projected to reach one billion by 2050. With a population dominated by young persons under the age of 24 almost reaching 60 per cent, the Sahel region has been ranked as having the highest dependency ratio in the world as 87.2 per cent of the age groups zero to 65 shows. The population is predominantly young, with almost 60 per cent under the age of 24.

These demographics, accompanied by the realization that the region has the highest fertility rate currently pegged at five to seven children per woman compounded with an annual population growth of three per cent globally, is the second side of Sahel’s coin.

How to effectively respond to these complex concerns has been a daunting task for the Sahelian governments and the global community. As they say, every coin has three sides. The third side of Sahel’s coin is what has been done to address the two chronic challenges.

At the onset of UN population agency (UNFPA) interventions in addressing the Sahel’s multifaceted challenges, the crucial reality of the demographic dividend was a factor that was adopted as an entry point.

UNFPA’s regional and country offices drove the demographic dividend agenda forward from 2017 by engaging all-stakeholders across areas of focus and moving from discussion forums to practical grassroots action.

UNFPA has been working with the respective governments through a multi-sectoral platform to support the development of initiatives for young people, women and children to curtail and insuring against the risk of radicalization, access to family health and better education. Through these approaches, young people become stakeholders and key development actors of their respective countries.

With the support of the UNFPA-WCARO, most countries in the region domesticated the AU Roadmap and embarked on implementing the ideals into reality. Within the wider Sahel, a number of flagship projects were rolled out to promote empowerment and capacity building for women and young people in sexual and reproductive health. These included the Gueule Tapee-Fass-Colobane commune, which was inaugurated in 2017 in a populous urban sprawl and has recorded tremendous success with Senegalese President Macky Sall calling for its replication all over the region.

The others are Sahel Women Empowerment and Demographic Dividend (SWEDD), which was initiated with the patronage of Niger’s former President Mahamadou Issoufou. SWEDD, which started with six countries, is now in nine countries and has launched the Regional Centre of Excellence for Midwifery Education and Clinical Mentoring alongside setting up the emergency obstetric care networks that facilitate better coverage and enabling economies of scale and greater efficiency. SWEDD has also led in scaling up “Safe spaces” and the setting up of the Illimin (knowledge for dignity) to protect adolescent girls who are victims of gender-based violence.

The premiere of C’est la Vie (That’s Life) TV series filmed in Senegal on family health issues and broadcasted in West and Central Africa has now passed the 20 million viewers mark in just seven capital cities. Add to the viewership the impressive strides of the 106,263 young and adolescent girls supported to enroll and stay in school, avoiding early marriages. Moreover, another set of 99,704 girls in their late teens attending vocational courses and income-generating economic empowerment programmes. These are some of the demographic transformational successes taking place in the Sahel, but hardly make it to the headlines.

As the new decade begins, our quest now is to upscale the successes of change enablers harnessing demography to achieve peace, security and development as evidenced by SWEDD, FassE, MUSKOKA and Population d’Afrique which is a regional initiative alongside other community-based initiatives.

Given the numerous trials faced in the just-ended decade, it is imperative to rethink the previous assumptions that informed the various interventions in the Sahel and bolster the simple yet effective all-inclusive grassroots initiatives. The dynamic demography that defines the Sahel is its youth and women who are actively involved in reimagining the region while at the same time recasting a new intervention narrative that goes deeper to find tangible lasting solutions that will expedite a regional “build forward better” for this new decade.