Azerbaijan Democratic Republic (ADR) was proclaimed on May 28, 1918 with the adoption of the Declaration of Independence – the exemplary policy document which committed to the principles of democracy and rule of law. This republic was proclaimed in the midst of the turbulent and complex geo-political situation in the South Caucasus region.

As President of Azerbaijan Ilham Aliyev said : “From the very first days of its existence, the Azerbaijan Democratic Republic, based on the principles of the people’s power and the equality of people, gave the same rights to all citizens of the country, eliminating the race, nationality, religion, and social inequality.”

Being a country of multicultural values and tolerance for thousands of years, ADR never performed religious fanaticism, ethnic discrimination and xenophobia. Followers of various faiths coexisted for centuries and many languages, traditions and cultures of peoples living in the country survived. Azerbaijan is historically land of tolerance, rich human values and equality spirit. Women historically played important role in public life.

Azerbaijan was a pioneer in the universal women rights movement as one of the first countries in the world, and the very first majority-Muslim nation, to grant women equal political rights along with men in 1918. While the United States and many European countries had not yet allowed women to vote, ADR granted unrestricted suffrage to women in 1918.

The ADR lasted 23 months, at a time when the country had a population of about 4.6 million and a territory of 114,000 square kilometers (44,000 square miles), before being occupied by the Bolsheviks on April 28, 1920. Centered on a secular, parliamentary rule that was based on universal, free and proportionate representation, the ADR established the traditions of a parliamentary republic.

In June of 1918, the ADR government raised the national flag, established the national army and announced the Azerbaijani language as the official state language of the newborn republic. Baku State University was established, becoming a large education and scientific center that became first modern university in the territory of Azerbaijan forming the first European style school in the entire Muslim World.

The national flag was chosen as tricolor: blue, red and green with a white star and crescent. The flag symbolizes the Turkic origin of Azerbaijanis (blue), progress and modernity (red) and Islamic belief in the Caspian country (green).

The government had attached significant importance to foreign relations for the newly formed ADR to gain legitimacy. Besides building bilateral relations with a number of countries, establishing and hosting numerous diplomatic missions, Azerbaijani government also sought international recognition at the highest level.

The Ottoman Empire became the first foreign power to sign a bilateral friendship agreement, while European countries and the United States recognized the ADR at the Paris Peace Conference in 1919. Government of Azerbaijan intended to establish international relations with other countries, especially to be recognized by global powers and League of Nations.

For this purpose, Azerbaijani government sent a diplomatic delegation to the Paris Peace Conference in 1919. A delegation led by the Chairman of the Parliament Alimardan bay Topchubashov met many delegations present at the Conference. President of the United States Woodrow Wilson would remember the meeting with Azerbaijani delegation in the following way :

“There [the Paris Peace Conference] came in a very distinguished group of gentlemen from Azerbaijan”. “I was talking to men who talked the same language that I did in respect to ideals, in respect to conception of liberty, in conceptions of rights and justice.”

Although it was based on high aspirations and modern-day ideals, the newly-formed state did not last long. Bolshevik forces occupied Azerbaijan on April 28, 1920.

Despite the difficulty of the times surrounding its establishment, ADR succeeded in combining western democratic, liberal principles and ideals with eastern cultural values. It was a secular and independent state which granted equal political, social and economic rights to its citizens regardless of their origin, class or gender. ADR was established on Western model as a parliamentary democracy, political pluralism and a multi-party system.

The newly-formed republic faced challenges in almost all spheres. A national army was set up for protecting the territorial integrity, a task which it fulfilled by restoring sovereignty in a number of territories, including Karabakh. Due to the complex international situation, ensuring national security was primary goal of the government.

The first Parliament of Azerbaijan was established in 1918 and it was a forum where representatives of all religious and ethnic groups could freely and equally voice their opinions. The parliament, backed up by a cabinet comprised of bright, young and brilliant minds, carried out a number of important strategic reforms.

The Law on Elections on Constituent stated that the members of Parliament should be citizens above age of 20, on equal gender and election rights, through direct and secret ballot by people. Thus, being ahead of many countries around the world.

The ADR government and parliament got a long way on issuing legal acts on gender equality in a very short time. By the end of 19th century prominent writers, musicians and poets such as Mirza Alakbar Sabir, Jalil Mammadguluzada, Uzeyir Hajibayli and etc. of the country encouraged women rights, especially education of girls. At the beginning of 20th century, intelligentsia of Azerbaijan widely promoted women rights. The same period Azerbaijani women started actively engaging in social, cultural, scientific and other areas. Their role in media was also gradually increasing.

One of the major social reforms was the abolishment of censorship on press. Moreover, ADR accorded due attention to the significance of the education of young generation. During these years, the parliament passed a bill authorizing the government to allocate scholarship to youth for their study abroad. Despite hardships and financial shortages, the Azerbaijani authorities sent 100 young people to various educational institutions in Germany, France, Italy and the United Kingdom.

The national idea that was fostered during the 23 month of its independence survived and helped revive an independent Azerbaijan towards the end of the 20th century. Having restored its independence in 1991, the Republic of Azerbaijan declared herself a successor state of Azerbaijan Democratic Republic. Despite its short existence, ADR has become one of the most honorable and glorious periods of Azerbaijani history. 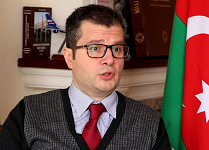