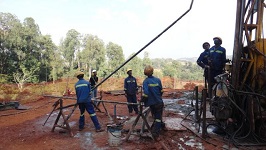 KEFI Minerals indicated that it is planning to commence its Tulu Kapi gold project in Ethiopia in 2022.”The company has planned to be as soon as the security situation allows, which is expected to be in early 2022,” the company said in a press statement.

KEFI shareholders Yesterday announced that they will allocate an additional 800 million birr for developmental projects including the launch of Tulu Kapi. In addition to the Tulu Kapi launch it will also be allocated for KEFI’s two other development projects in Saudi Arabia, Hawaii Copper & Gold and Jibal Qutman Gold.

According to the announcement by KEFI Gold and Copper plc the ultimate parent company of Tulu Kapi Gold Mines S.C and KEFI Minerals Ethiopia Limited, this is a small two-stage capital raising from its 5,000 shareholders on the London Stock Exchange of £13 million (US$18 million or 800 million Ethiopian Birr)

“KEFI Directors and management themselves invested over US$2 million which is approximately 100 million Ethiopian Birr in today’s capital raising in London. By this investment, combined with their shareholding of more than 10% in KEFI, this highly experienced senior team which has also managed some of the world’s largest mining companies demonstrates its full commitment to the development plans of the company, starting with Tulu Kapi.” Said Dr Kebede Belete, Chairman of KEFI Minerals Ethiopia Limited and Deputy Chairman of Tulu Kapi Gold Mines.

According to the chairman, the modern discovery of the industrial scale gold deposit at Tulu Kapi was approximately 15 years ago and KEFI was invited to take control in 2014 to introduce the latest international standards to the project.

KEFI has since then updated the mine design and successfully worked hard with Government regulators in assisting with policy initiatives like international bank accounts, market-based interest rates, the right to use gold price insurance or hedging, 70/30 capital ratio in recognition of the capital intensity of industrial-scale mining and the encouragement of Ethiopian country membership for multilateral development banks which allocate capital to African countries in particular.

As part of the Tulu Kapi Project Consortium, the banks signed their initial deal terms sheets two years ago. Since then they have completed independent experts due diligence reports and now await security and other normal requirements like detailed documentation and insurances to be satisfied to support the launch of the project.

The Tulu Kapi gold deposit was discovered and mined on a small scale by an Italian consortium in the 1930’s. Nyota Minerals Limited acquired the licences in 2009 and then undertook extensive exploration and drilling which culminated in an initial DFS in in December 2012 based on a 2.0Mtpa processing plant and capital expenditure totalling $290 million.

In December 2013, KEFI Minerals acquired 75% of Tulu Kapi for £4.5 million. This acquisition cost equates to only $10 per reserve ounce and provides the information collected from historical expenditure of more than $50 million.

The Ethiopian government became entitled to a 5% free-carry interest in Tulu Kapi upon granting of the Mining Licence in April 2015.

The Exploration Licences held by KEFI Minerals (Ethiopia) Limited cover an area of approximately 200 square kilometres over and near the Tulu Kapi deposit.

The altitude of the project area is between 1,600m and 1,765m above sea level. The climate is temperate with annual rainfall averaging about 150cm.

Tulu Kapi is located approximately 360km due west of Ethiopia’s capital, Addis Ababa. A main road to Addis Ababa is within 12km of Tulu Kapi and power lines on the main electricity grid are within 40km of the project.