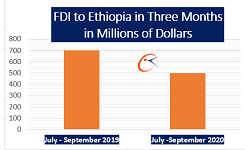 The Investment Commission of Ethiopia says the country has half a billion foreign during the first quarter of the country’s current fiscal year. Compared to last year the amount declined 20 percent.

Compared to the FDI the country attracted same period the previous year, the amount has declined by 20 percent as a result of the impact of the global pandemic, coronavirus, according to Commissioner of Ethiopian Investment Commission Lilise Neme. The Commissioner noted that 42 percent are registered to invest in manufacturing, 47 in service and 11 percent are in agriculture sectors.

Meanwhile, even though China, Turkey and India have been among top FDI sources in Ethiopia, only one Chinese company has appeared in the list of top 200 taxpayers, Ethiopia has awarded a few weeks ago. 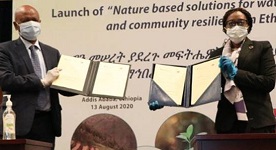 Women only operated Ethiopian flight takes off for Oslo