Two turbines of Tekeze Hydropower Dam of Ethiopia have started generating 150 megawatts of electricity this week after several months of disfunction.

The two turbines have restarted producing 150 megawatts of electricity this week after being out of service for several months, according to Moges Mekonnen Alemu, Corporate Communications Director of Ethiopian Electric Power (EEP). Moges told NewBusinessEthiopia.com today that the CEO of EEP, Dr. Abreham Belay, is currently visiting Tekeze Hydroelectric Dam and the nearby Ashegoda Windfam in the northern part of Ethiopia.

He stated that three of the four turbines of Tekeze Hydropower Dam were out of service mainly due to mechanical problems, partly caused following the water level decline, which often causes some parts of the turbines not to function properly.

He also indicated that Ashegoda Wind, which has the capacity of generating 120 megawatts of electric power with a total of 80 turbines, is currently generating half of its capacity. The visit of the CEO aims to asses the problems and find solutions that will enable Ashegoda Windfarm produce power at its full capacity, according to Moges.

With the objective of providing enough electricity for Mekele Industrial Park and the inhabitants of the City, EEP recently launched a public private partnership project that will be completed within 16 months. The project involves expansion and boosting the capacities of Mekele and Wukro power substations, according to Mr. Moges. It is recalled that recently EEP has completed expansion and upgrading of Axum and Debre Birhan power substations. 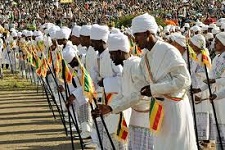