Ethiopia ranks top in eastern Africa having the largest number of illiterate people – over 57% illiterate women aged between 15-45, a report indicates.

Over 57% of Ethiopia’s women and around 30% of men in working age group (15-45 years old) are illiterate, according to a report presented at the 23rd regional integration experts meeting opened in Asmara, Eritrea on Tuesday.

Andrew Mold, Officer in charge, at UN Economic Commission for Africa, who presented a paper entitled Macroeconomic and social overview of Eastern Africa, described the situation as Achilles hills, stressed the need for Ethiopia to address the high number of illiteracy.

Indicating that he took the figures from Demographic House Survey 2016, Andrew indicated that Kenya also has a high number of illiterate women between 15-49 ages.

“Ethiopia and Kenya – the two largest economies in the region – are faced with high illiteracy rates among women. It is incumbent upon governments to monitor and address girls’ dropout rates in primary and secondary schools. It is important to go beyond the numbers to seeking to understand and address the story behind the numbers,” the report stated.

Literacy involves a continuum of learning in enabling individuals to achieve his or her goals, develop his or her knowledge and potential, and participate fully in community and wider society” (UNESCO, 2018).

The definition of literacy has evolved over time to reflect evolved skill sets – from the ability to read and write, to wider definition of “the ability to identify, understand, interpret, create, communicate and compute, using printed and written materials associated with various contexts.

The experts are holding their annual meeting in Asmara for the first time for the annual meeting that deals with the economic integration ad growth of the 14 Eastern Africa countries.

Reports show that around 8.5 million youth are entering the job market in the 14 eastern Africa countries. Meanwhile the countries have not been able to provide jobs for the youth partly because the countries are not equipping the youth with the proper skills needed in today’s job market.

In today’s artificial intelligence, biotechnology ad fourth industrial revolution age, experts’ are advising countries to train graduates for the jobs of tomorrow but not for the jobs of yesterday.

Partners to provide E-Learning for African Financial Institutions in Africa 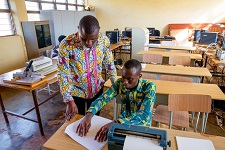