A cookbook comprising cuisines of different countries from Africa and Europe is launched in Addis Ababa, Ethiopia last week.

During the event, invited guests have taken part in a live cooking competition coached by most-celebrated Ethiopian Chef Yohanis Gebreyesus.

The event is aims at celebrating the successful publishing and at introducing the audience to the highly symbolic cookbook, featuring recipes and emblems of the culinary heritage of Europe and Africa.

“Those who have had the privilege of travelling to our two continents have been struck by the vast diversity that can be observed in the culture and ways of living within Africa and Europe,” said Ranieri Sabatucci, the EU Ambassador to the African Union.

“This diversity is a source of richness. Without it, as human beings our lives would be significantly limited, less meaningful. Those who are engaged daily in the relationship between Africa and Europe see diversity as an attraction, not a challenge,” Ambassador Sabatucci said.

“It is our profound belief that diversity is something to celebrate and to build on, and it drives our commitment to this relationship. Culture in general and food in particular are essential elements of this diversity,” he said.

The EU Delegation to the African Union organized the event in the belief that, in order to grow a sustainable and productive relationship and eventually bring it to the highest degree of enjoyment, appreciation of each other’s culture is crucial.

The event involved the audience, journalists and members of the diplomatic community, in a cultural immersion: the guests had the opportunity to participate in a live cooking show and to taste a selection of dishes from the Cookbook.

It is indicated that the cookbook is a collective work, the result of contributions coming from AU and EU Commissioners, AU and EU Member State Ambassadors and others who are involved in building the Europe-Africa relationship, in Addis Ababa and across all Africa.

Created in 2008, the Delegation of the European Union (EU) to the African Union (AU) contributes to strengthen the links and partnership between EU and AU.

The EU Delegation operates in a network of national, regional and pan-African institutions from 55 AU Member States, such as the AU Commission, and international partners. The Delegation deals with a wide range of topics.
[embedyt] https://www.youtube.com/watch?v=UE95TMbP_0A[/embedyt] 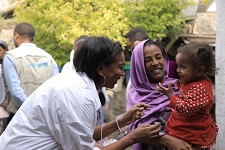