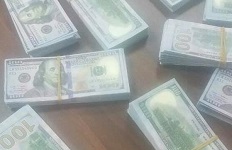 Ethiopian Customs Commission has seized 449,700 U.S dollar notes from smugglers who were trying to take out of the country.

The illegal cash is captured on Tuesday this week from three Ethiopians around Humera town while they are trying to smuggle it into the neighboring Sudan. They were seized travelling in the bush avoiding the legal custom post between the two countries, according to the report of the Ministry of Revenue of Ethiopia.

Members of the federal police, defense force and customs officers have contributed in capturing the smugglers and securing the wealth, which was leaving the country illegally. The three individuals are arrested while the confiscated cash is deposited in the Commercial Bank of Ethiopia, the state financial institution, according to the report.

Mainly because a huge trade deficit, Ethiopia has been suffering from severe shortage of hard currency for many years. Ethiopia’s annual export earnings stand at around $3 billion, while the country spends around $16 billion annually on import.