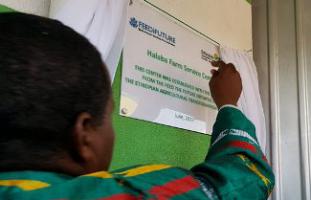 The FSCs were inaugurated in separate ceremonies on June 10 and 11, and are part of broader plans to have four farm centers in Southern regional state and 20 in total.

According to Dereje Biruk Senior director for production and productivity sector at the government institution Agricultural Transformation Agency (ATA)  The main objectives of having farm centers are to enhance access of smallholder farmers to improved inputs like seed, fertilizers, crop protection chemicals, and veterinary products.

He further says the farm service centers are pilot projects, which are based on experiences of Asian and African countries, and if successful will be scaled up with the involvement of ministries and regional agriculture bureaus.

The Farm Services Project runs from July 2015 to April 2018, with a total project budget of 4 million dollars throughout Oromia, Amhara, Tigray and Southern regions.

With over 83 percent of Ethiopia’s population residing in rural areas, it is hoped the FSC project supported by the likes of USAID and a US based non-profit organization Cultivating New Frontiers in Agriculture (CNFA), will boost Ethiopia’s efforts to achieve food self-sufficiency.

By consulting international case studies and leveraging best practices, the study proposed a prioritization process (such as the Transformation Agenda) to identify and resolve systemic bottlenecks in Ethiopia’s agriculture sector. It also identified the need to establish a dedicated organization (the ATA) to help catalyze and drive the process forward by supporting all key stakeholders in the sector.

During the past four years, the ATA has continued to refine and contextualize the Asian approach of developing and implementing a “Transformation Agenda” to the practical realities of Ethiopia’s current agricultural system.

The ATA and the Transformation Agenda concept grew out of a two-year extensive diagnostic study of Ethiopia’s agriculture sector, led by the Ministry of Agriculture and facilitated by the Bill & Melinda Gates Foundation. The study examined how Ethiopia could replicate the agricultural transformation seen in many Asian countries during their first phase of development.