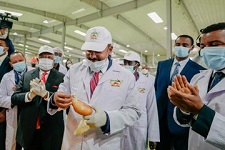 Built in Kaliti sub city in Addis Ababa on 41,000 square meters of land, will be able to reduce the current cost of a 100 gram bread to 1 birr and 20 cents from three birr. “The Sheger Bread Factory we inaugurated today and which took 10 months from conception to finalization is symbolic of our path to prosperity. Producing 80,000 pieces of bread per hour, availing it affordable prices will contribute to food security,” Abiy said.

The bakery and the factor is built by MIDROC Ethiopia, which is owned by the Ethio Saudi billionaire Sheikh Mohammed Al Amoudi who has not returned to Ethiopia after released from Saudi Arabia prison a few years ago. Sheger Bread Factory has costed the investor some 900 million birr (about $26 million).

“Today the Sheger Bakery factory is going through testing. Look at the pace of these machines! Testing and monitoring will be completed in the next few weeks & then we are finally in production!!! Expected capacity is 2 million loaves of bread per day! So proud of our team! ” twitted Deputy Mayor of Addis Ababa City Takele Uma with a video clip.

It is stated that including those working in the factory some 3,400 people in Addis Ababa will get job at the factory and in the distributions of the bread across the four corners of the city. 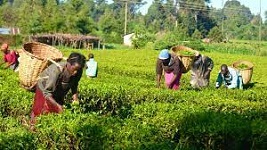 Ethiopia to relieve congestion in the Port of Djibouti