Tens of thousands of Africans seek passage every year to the Middle East, crossing hundreds of desert miles towards the continent’s eastern coastline on trails as old as mankind itself.

Exact numbers of irregular migrants are unknown, although it is estimated that between 80,000 to 100,000 irregular migrants take to Africa’s Eastern migratory route every year. Who they are, where they come from, where they hope to arrive – and into what kind of new life – can be captured in pieces of data. If you know where to look.

Flow monitoring, as the data-capturing task is known, has been a key effort by the International Organization for Migration (IOM) as it seeks to assist member states trying to grasp the implications of so many people on the move. In the Horn of Africa region, IOM’s work has been supported by Ethiopia’s Ministry of Labour and Social Affairs since 2019.

IOM Ethiopia has been publishing a monthly ‘dashboard’ capturing daily quantitative information on migration’s ‘in’ and ‘out’ flows. The work primarily focuses on locations, destinations, origins, demographics and population statistics.

For the first time, IOM Ethiopia has published a Flow Monitoring Survey Report on the movement of migrants. The report, just released, includes qualitative findings and analysis of the movements of migrants and insights into routes, demographics, travel histories, intentions and the needs of migrant groups.

“Key findings show that most of the 1,855 migrants surveyed, who were 69 per cent male and 21 percent female, were unemployed prior to their departure. The primary country of departure amongst respondents was Ethiopia, followed by Sudan and Djibouti and the primary intended final destinations included the Kingdom of Saudi Arabia, Sudan and Ethiopia,” explained Cecilia Thiam, IOM Ethiopia’s Displacement Tracking Matrix (DTM) program manager.

DTM Ethiopia’s February 2020 Flow Monitoring Registry (FMR) dashboard reflects 10,907 observed movements across the country’s five flow monitoring points (FMPs). Of these movements, 72 percent were outgoing, with a majority headed to the Kingdom of Saudi Arabia, and 28 percent were incoming, most of which came from Sudan.

The work of the DTM unit also captures the human drama of this movement, usually by recording the testimony of a 17-year-old migrant who goes by the name ‘Idris’, interviewed in a recent DTM survey.

“I loaded trucks for two years to save 4,000 birr ($135) to pay a smuggler to get from Ethiopia to Djibouti and on to Saudi Arabia, to find a job. We paid 2,000 birr ($70) to get to Djibouti and spent the rest on food and water,” said the youth from Ethiopia’s Tigray province. He continued: “When we got to Djibouti, we couldn’t get across the Gulf of Aden to Yemen to reach Saudi. There was no boat to collect us as promised, and we had no idea where the smuggler was.”

Idris’ group ended up stranded in Djibouti. The story is quite common. Ethiopia is the most popular route for African migrants trying to reach the Gulf and Far East. It is also a country of origin producing migrants, a destination and a transit for migrants. Over 62 per cent of migrants cited economic reasons as the main motivating factor behind their movements, and perceived job opportunities.

The flow monitoring also captures daily qualitative information on household intentions, or reasons for choosing a destination country, to complement Flow Monitoring Registry data. The monitoring is used at five flow monitoring points in Humera, Dawaale, Tog Wujale, Metema and Galafi, in the northern, north-western and north-eastern border of the country.

IOM Ethiopia plans to expand flow monitoring activities in 2020 by increasing data collection points to capture more movement in additional networks, including in the northern and southern routes.

The Ministry of Labour and Social Affairs has expressed interest in collaborating with IOM Ethiopia on this and they plan to use the information gathered to promote orderly, safe and dignified migration as well as to prevent trafficking and other protection related issues arising from irregular migration.

IOM Ethiopia’s DTM flow monitoring work is made possible through regional funding from the European Union and Germany. 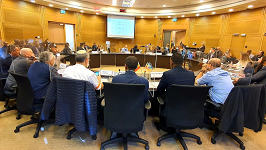