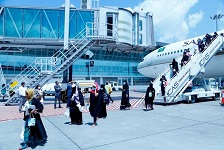 In the last three weeks Ethiopia has repatriated 993 citizens migrated illegally to Saudi Arabia, Tanzania and Djibouti, said the Ministry of Foreign Affairs of Ethiopia.

In his weekly media briefing Ambassador Dina Mufti said, out of the total 953 are from Saudi Arabia, five from Tanzania, and 35 from Djibouti. Those repatriated from Saudi includes the 357 migrants from Riyadh, on October 15.