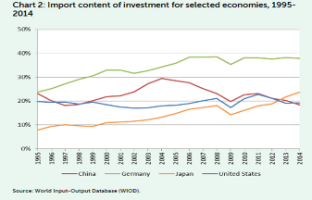 Economists at the World Trade Organisation (WTO) anticipate global trade growth to be between 2.1% and 4% while they expect 2.4% growth for 2017.

The unpredictable direction of the global economy in the near term and the lack of clarity about government action on monetary, fiscal and trade policies raises the risk that trade activity will be stifled. A spike in inflation leading to higher interest rates, tighter fiscal policies and the imposition of measures to curtail trade could all undermine higher trade growth over the next two years.

“Weak international trade growth in the last few years largely reflects continuing weakness in the global economy. Trade has the potential to strengthen global growth if the movement of goods and supply of services across borders remains largely unfettered. However, if policymakers attempt to address job losses at home with severe restrictions on imports, trade cannot help boost growth and may even constitute a drag on the recovery,” said WTO Director-General Roberto Azevêdo.

“Although trade does cause some economic dislocation in certain communities, its adverse effects should not be overstated – nor should they obscure its benefits in terms of growth, development and job creation. We should see trade as part of the solution to economic difficulties, not part of the problem. In fact, innovation, automation and new technologies are responsible for roughly 80% of the manufacturing jobs that have been lost and no one questions that technological advances benefit most people most of the time. The answer is therefore to pursue policies that reap the benefits from trade, while also applying horizontal solutions to unemployment which embraces better education and training and social programmes that can quickly help get workers back on their feet and ready to compete for the jobs of the future,” he said.

The WTO’s more promising forecasts for 2017 and 2018 are predicated on certain assumptions and there is considerable downside risk that expansion will fall short of these estimates. Attaining these rates of growth depends to a large degree on global GDP expansion in line with forecasts of 2.7% this year and 2.8% next year. While there are reasonable expectations that such growth could be achieved, expansion along these lines would represent a significant improvement on the 2.3% GDP growth in 2016.

In 2016, the weak trade growth of just 1.3% was partly due to cyclical factors as economic activity slowed across the board, but it also reflected deeper structural changes in the relationship between trade and economic output. The most trade-intensive components of global demand were particularly weak last year as investment spending slumped in the United States and as China continued to rebalance its economy away from investment and toward consumption, dampening import demand.

Global economic growth has been unbalanced since the financial crisis, but for the first time in several years all regions of the world economy should experience a synchronized upturn in 2017. This could reinforce growth and provide an additional boost to trade.

Forward looking indicators, including the WTO’s World Trade Outlook Indicator, point to stronger trade growth in the first half of 2017, but policy shocks could easily undermine positive recent trends. Unexpected inflation could force central banks to tighten monetary policy faster than they would like, undercutting economic growth and trade in the short-run.

Other factors, such as the uncertainty provoked by the United Kingdom’s withdrawal from the European Union could potentially have an effect. Meanwhile, the possibility of a rise in the application of restrictive trade policies could affect demand and investment flows, and cut economic growth over the medium-to-long term. In light of these factors, there is a significant risk that trade expansion in 2017 will fall into the lower end of the range.

The recovery of world trade this year and next is based on expected world real GDP growth at market exchange rates of 2.7% in 2017 and 2.8% in 2018. This GDP estimate assumes that developed economies maintain generally expansionary monetary and fiscal policies, and that developing economies continue to emerge from their recent slowdown.

It should be noted that the WTO does not produce its own GDP forecasts, but rather uses consensus estimates based on a variety of sources including the International Monetary Fund, the Organization for Economic Cooperation and Development, and the United Nations, among others.

Historically, the volume of world merchandise trade has tended to grow about 1.5 times faster than world output, although in the 1990s it grew more than twice as fast. However, since the financial crisis, the ratio of trade growth to GDP growth has fallen to around 1:1. Last year marked the first time since 2001 that this ratio has dropped below 1, to a ratio of 0.6:1 (Chart 1). The ratio is expected to partly recover in 2017, but it remains a cause for concern.

Key Points:
• World merchandise trade volume is forecast to grow 2.4% in 2017, but due to a high level of uncertainty, this is placed within a range of 1.8-3.6%.
• This is up from a very weak 1.3% in 2016, as global GDP growth rises to 2.7% this year from 2.3% last year.
• Trade growth in 2018 should pick up slightly to between 2.1-4.0%.
• The ratio of trade growth to GDP growth fell below 1:1 in 2016, for the first time since 2001.
• The slowdown in emerging market economies contributed much to the sluggish rate of trade growth in 2016, but these countries are expected to return to modest growth in 2017.
• Export orders and container shipping have been strong in the early months of 2017, but trade recovery could be undermined by policy shocks.
• Policy uncertainty is the main risk factor, including imposition of trade restrictive measures and monetary tightening.