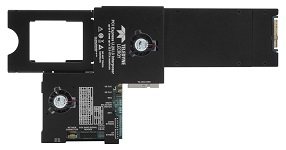 The U.2/U.3 interposer cards enable the capture and analysis of PCIe 5.0 traffic when combined with a Teledyne PCIe 5.0 Summit protocol analyzer.


Driven by requirements for higher performance storage solutions, the SSD market continues to show strong growth as PCIe 5.0 is adopted and used as the interconnect technology for SSDs in various forms, including the U.2/U.3 form which is usable in existing 2.5″ and 3.5″ mechanical enclosures. The U.2/U.3 SSD allows IT departments to use SSDs in existing hardware, where previously SAS and SATA drives had been used. Comprehensive testing and validation of single-port and dual-ported Non-Volatile Memory Express® (NVMe) SSDs as they come to market is critical to ensure performance, functionality, and interoperability.

Teledyne LeCroy’s new PCIe 5.0 U.2/U.3 interposer for SSD protocol analysis, paired with one of the Teledyne LeCroy PCIe 5.0 Summit protocol analyzers, enables the capture and analysis of all PCIe bus traffic between a host backplane and a single-port or dual-ported SSD.  The PCIe 5.0 U.2/U.3 Interposer supports up to four lanes in a single-port PCIe 5.0 link configuration or two ports each with two lanes in a dual-port SSD.

Teledyne LeCroy protocol analyzers and exercisers have been at the forefront of PCI Express development since its inception 20 years ago, working closely with the computer industry to provide the analysis features companies have needed for PCIe systems, storage and IoT technology development.