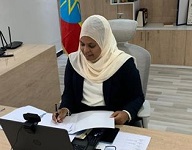 The Ministry of Peace of Ethiopia on Friday inked a deal with International Institute for Information Technology of India to introduce modern digital national identification card (ID).

The Minister indicated that the project is expected to be realized in the coming eight months time. She also stated that the digital ID will modernize business activities in the country and related services.