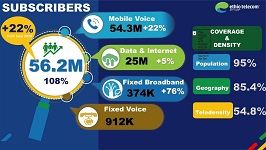 The fully state-owned Ethio Telecom has generated an annual revenue of 56.5 billion Birr (about $1.3 billion) during its budget year concluded June 30, 2021.

Compared with the previous year same period, The revenue has grown by 18.4%, according to the CEO of Ethio Telcom, Firehiwot Tamiru, who briefed reporters in Addis Ababa this morning. Over 47 percent of the revenue was collected from mobile voice, followed by data and internet, which represented 27 percent of the total revenue.

It is indicated that During the year, Ethio Telecom has paid 26.6 billion Birr tax and one billion Ethiopian Birr dividend, effected $327.5 million (13.6 billion Birr) payment for loan-for projects implemented under vendor-financing modality,” she said.

In her report Ms. Firehiwot stated that mobile voice, and Data & Internet have also shown growth of 16.5 percent and 10.5 percent compared to same period the previous year. The total number of subscribers of Ethio Telcom has increased to 56.2 million showing 22 percent increase from the previous year.

“Currently we are running 132 projects on infrastructure and system capacity expansions and enhancements,” Frehiwot said. She noted that the aim of the ongoing projects is to boost network coverage capacity and quality of services out of which projects like expansion of 4G/LTE and 4G/LTE Advanced. So far modular data center, smart poles, Next Generation Business support system are completed.

The recently launched mobile money service of Ethio Telecom, Telebirr has also secure about 6.6 million subscribers within a few months, according to Ms. Firehiwot, who noted that the state owned enterprise has also has disbursed some 847 million Birr on various development related projects, as part of its corporate social responsibilities program. 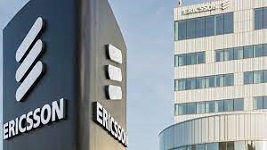 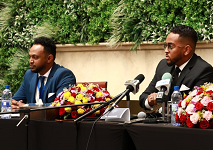