“The President of the Federal Republic of Somalia, Mohamed Abdullahi Mohamed, arrived in Asmara in mid morning hours today for a two-day working visit. The Somali President & his delegation were accorded warm welcome by President Isaias on arrival at Asmara’s International Airport,” twitted Yemane G. Meskel, Information Minister of Eritrea.

Meanwhile in recent months Al Shabaab has been spoiling the peace and security in the region, especially in Somalia and Kenya. Somalia and Eritrea have recently begun renewing their relations with the facilitation of Prime Minister Abiy Ahmed of Ethiopia, who recently won the Nobel Peace Prize recently for his contribution in restoring peace in Eastern Africa, mainly between Ethiopia and Eritrea. It is recalled that about two weeks ago, President Isaias has made an official visit to Ethiopia. 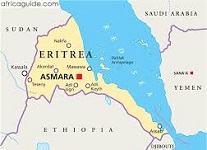