With only a week left to conclude their election campaign, political parties competing in the 6th General Election said they are doing their level best to make use of the campaign the remaining days.

He said the early days of the election campaign were used mainly to teach the benefits of election and to introduce manifesto of the party.

“We have used effectively the air time allocated to us in the media. I can say our party used over 90 percent of the time we were given. I believe we have reached our people in the  process, even though there were some problems in the first days of the campaign,” the head stated.

This week looks very busy for the Ethiopian Citizens for Social Justice Party as candidates and members of the party are engaged in door-to-door campaign, participating in election debates and using the additional media air time left.

Zelalem said “the additional days have given us enough time to reach our people. In these final days of the campaign we are telling the people details of the objectives of the party. Our leaders are traveling all over the country to campaign. So these final days are very critical for us.”

Hidase Party Secretary-General, Surafel Eshetu said his party is working hard in these final days of the campaign to explain to the people about the policies and programs of the party.

“In the first weeks of the election campaign, it was very difficult for us. We did not use the air time allocated to us effectively because we had some limitations in using campaigning effectively.”

The remaining week will, therefore, give us additional time to explain the party program, he stated.

“We are reprinting and hanging banners in the capital city. Our candidates are busy explaining why citizens should elect us. The additional air time will therefore help us to finalize our media campaign. Thus we will be working very hard until the final day of the campaign,” the secretary-general added.

The National Electoral Board of Ethiopia extended the campaign period following the postponement of the polling day to June 21. ENA 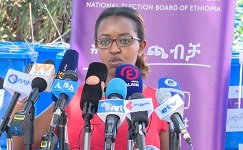