Ethiopia may be able to hold general elections between 10 to 13 months’ time if the current state of emergency is lifted and the government allows gathering of 200 to 300 people,

This is indicated this morning by the head of National Electoral Board of Ethiopia, Birtukan Mideksa, who responded to questions raised by the ten members Constitutional Inquiry of Ethiopia. Meanwhile Birtukan stressed that nobody at this stage can tell confidently about the future in relation to the spread of COVID-19 pandemic in Ethiopia, which forced the government to declare a state of emergency.

But the Board has come up with two scenarios under which it can be able to conduct a free, fair and credible election. Under the first scenario, the Board can conduct the 6th general election of Ethiopia cautiously between 12 to 13 months’ time if the government now decides to lift the state of emergency and allows gathering of at least 200 to 300 people in one place.

Under the second scenario, if things are more relaxed, the Board still needs about 10 months to hold the election. Meanwhile the Board will need an additional budget of over 6 billion birr (about $190 million at the current exchange rate).

Other than the National Electoral Board of Ethiopia, the Constitutional Inquiry of Ethiopia today also held hearing with officials of Ministry of Health and Ethiopian Public Health Institute. Minister of Health Dr. Liya Tadesse indicated that in the current situation of COVID-19, holding general elections in Ethiopia will endangers the lives of citizens.

Before the outbreak of COVID-19 pandemic Ethiopia was planning to hold general election in August 2020. Today’s hearing with the health and election officials is held to hear what about the state of the pandemic in Ethiopia and the way forward.

The Constitutional Inquiry of Ethiopia is recently established to interpret certain articles of the Ethiopian Constitution in relation to postponing general election during pandemic and under the state of emergency.

In addition to today’s hearing, the Constitutional Inquiry has also held hearings last week with over two dozens of lawyers and experts who reflected on articles of the constitution. In relation to election, state of emergency and the fate of the current regime whose mandate will expire next October.

The Constitutional Inquiry is expected to come up with a decision that will enable the current government, mainly to the House of Federation, to act accordingly.

Meanwhile the Constitutional Inquiry of Ethiopia is being criticized by some scholars as talking about luxuries ignoring the priorities. “…These guys are amazingly irresponsible. What worries me day and night is a) how can we service if the virus spreads among the community & b) how will people economically survive this period. What they are talking about is a luxury that we cant afford. They’ve no idea about priority,” twitted Alemayehu Gedda, renowned Addis Ababa University Economics Professor. 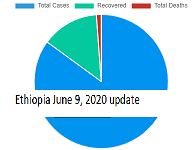 Five die from coronavirus in Ethiopia