The have gathered this morning for an extraordinary meeting and approved the new bill labeled, Ethiopian election, political parties’ registration law and election ethics. It is indicated that 149 improvements including the naming of the law, are made on the first draft presented to the standing committee at the parliament a few weeks ago.

The improvement made to the first draft also includes on how parties do election campaigns and on how they use the media, among other things. The approved law has also omitted the article that gives priority to female candidate if she has got equal vote with a male candidate.

Meanwhile around 57 political parties in the country, who previously signed election code of conduct along with the ruling party, have opposed parts of the new law at a press conference this week in Addis Ababa. One of the issues the parties opposed is the article of the new law that requires a national political party to at least get 10,000 members to participate in an election and a regional party to secure at least 4,000 members.

Though the southern part of Ethiopia is still under military-led command post following the crisis related to Sidama zones quest to become a new region in the country, the ruling coalition – Ethiopian Peoples’ Revolutionary Democratic Front – has recently indicated that the general election of the country will take place on schedule in May 2020. 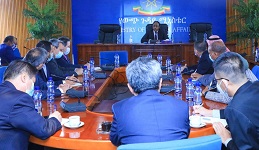