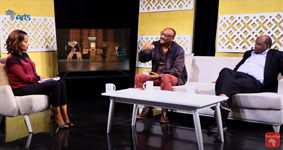 To help millions of Ethiopian farmers living on the highlands, from where hundreds of small river streams flow into the Abbay River, scholars advised Ethiopian government to build thousands of micro-dams near farmers’ villages.

At a discussion on ARTS TV today Author & Journalist Melkamu Zerihun said, Ethiopia needs to build thousands of small dams near the villages of the farmers living on the highlands of Ethiopia in order to properly utilize the water that flows into the Abbay River. He made the comment talking about his new book, that focused on the Ethiopia’s Abbay River and centuries old relation between Ethiopia and Egypt,

“Recently I heard the Prime Minister saying that we will build 100 dams. But I say that is not enough. We need 10,000 to 15,000 small dams around the villages the farmers from where the water that flows into Abbay River,” said Melkamu, who is also known for writing historical theaters.

Including Abbay the Constitution

In relations to the Great Ethiopian Renaissance Dam (GERD), he also stated that Egypt has been mobilizing all its media power, diplomatic resources to put pressure on Ethiopia as part of its long strategy to destabilize Ethiopia and control the source of the Abbay River.

In his book, Zerihun stated that the project of Egypt to destabilize Ethiopia has over 2,000 years history.

The renowned sociologist, Dr. Erssido Lendebo, on his part indicated that Ethiopian Universities should be having a department that allow students to study Egypt to help them understand how Egyptians think about Ethiopia. He noted that history shows that Egypt has been working for centuries to destabilize Ethiopia to control the source of Abbay River, which flows to The Nile.

The participant of the discussion stated that there is no river called the Nile in Ethiopia. There is only Abbay River, which gets its water from the highlands of Ethiopia where millions of poor farmers are living. They noted that helping these farmers to utilize this water for irrigation by building thousands of small dams should be priority of Ethiopian Government.

Indicating that from every 100 drops of rain water in Ethiopia 60 of the drops flow into the Abbay River, Dr. Ersido indicated that not using / harvesting this rain water and using for irrigation, means allowing millions the smallholder farmers to remain in abject poverty. At the moment most of the Abbay River water resource leaves  Ethiopia in three directions.

Ethiopia needs to utilize this rain water that feeds Abbay River not to harm Egypt or Sudan, but to feed millions of its poor people, according to Dr. Ersido, who said that Abbay means Ethiopia. “It is hard to imagine Ethiopia without Abbay River. Amhara, Oromia, Benishangul, Gambella regions literally are Abbay” he said during the TV discussion aired this afternoon.

Is Ethiopia’s reform from government dictatorship to gangsters’ rule?