President of Eritrea Afwerki returns to Asmara this morning concluding his two days visit in Ethiopia including tour of agricultural projects.

President Isaias has returned home after “a fruitful working visit to Ethiopia” which was marked by extensive talks on enhancement of bilateral ties, regional issues of mutual importance and site visits to developmental projects in Oromia Regional State of Ethiopia, according to Yemane G.Meskel, Information Minister of Eritrea.

He stated that President Isaias Afwerki and the delegation accompanying him visited a number of agricultural and water development projects in the Zuway area of the Oromia Regional State. The two leaders also had further discussions on bilateral cooperation and regional issues.

After Ethiopia’s reformist Prime |Minister came to power in April 2018, the relationship between the two neighboring countries have been improving. From 1998 to 2000 the war between the two counties has reportedly claimed lives of over 60,000 people from both sides. 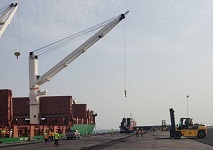