“While I admit that 242 isn’t a very big number by Ethiopian standards, the U.S. has a history, and a story, to celebrate as well,” said Michael Raynor, Ambassador of the United States in Ethiopia.

“Americans have a strong tradition of storytelling, one that is as dynamic and diverse as the cultures that make up our country, and it’s a tradition that influences our diplomacy as well. We like to tell our story because we think it’s a pretty great story, but also because we believe it can be a source of encouragement and inspiration to people around the world,” he said.

He also advises the leaders in Ethiopia to be committed to political reform and safeguarding its citizens’ rights so that, Ethiopia would not only build a more democratic and inclusive nation, but also a more prosperous and peaceful one as well.

“America’s story inspires because it’s a collective story, and a human one. It’s a tale of a country built on ideas, rather than identity. An American can look like anyone, believe in anything, and come from anywhere… And we recognize that our story is still being written, always with the aim, not always achieved, of making the next chapter a little better than the one before. The same is true for Ethiopia, and the United States stands firmly with all Ethiopians as they work together to build their narrative of peace, progress, and prosperity,” Ambassador Raynor said.

Among the attendees of the ceremony include, the former President of Ethiopia Girma Weldegiorgis, Ambassadors of different countries as well as representatives from various sectors including the business community such as well known business tycoon, Samuel Tafesse of Sunshine Construction Group, among others.

Ambassador Mary Beth who represents the United States government at the African Union on her part also noted that her country will continue supporting Africa’s economic integration efforts through the implementation of the African Continental Free Trade Area.

The Embassy celebrated the national day ahead of July 4, which is the Independence day to escape the rainy season in Addis Ababa. 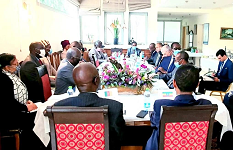