In recognition of his contribution to the foundation of the Organization of African Unity (OAU), the African Union (AU) is set to inaugurate Emperor Haile Selassie of Ethiopia’s statue in February.

The statue will be inaugurated next week during the 32nd African leaders’ summit in the presence of the reformist Prime Minister Abiy Ahmed of Ethiopia and leaders of other African countries, according to the Foreign Affairs Ministry of Ethiopia.

The OAU, which latter transformed itself to African Union (AU) was established in 1963. A few years ago the Au has also recognized Kwame Nkrumah of Ghana’s by building his statue with in the African Union headquarter compound in Addis Ababa, Ethiopia.

The Ministry of Foreign Affairs of Ethiopia recently issued a statement published statement on Selamta magazine applauding the role of Emperor Haile Selassie for the continent.

“Bridging the divide then existing among newly independent Africa countries may not look at all that difficult now. However it required the statesmanship of Emperor Haile Selassie I and the pragmatic evaluation of what was possible at the time to get Africans together to achieve what has always been the dream of Pan Africanists – the creation of OAU,” the ministry said.

Before he became Emperor and took power in 1930, he was originally named by his parents, Tafari Makonnen. The Emperor was deposed by his soldiers later branded itself as the socialist Derg Regime led by Mengistu Haile Mariam who later ran to Harare, Zimbabwe, when the former rebels now leading the country took power in 1991.

History recorded that Emperor Haile Selassie has played key role in bringing Ethiopia into the League of Nations and the United Nations. He has also played key role in the fight against the Fascist Italian invasion of Benito Mussolini.

During the invasion Emperor Haile Selassie went to Britain and manged to mobilize international support for the fight against the Italian invasions which lasted for five years.

When Italy invaded Ethiopia in 1935, Haile Selassie led the resistance, but in May 1936 he was forced into exile. He appealed for help from the League of Nations in a memorable speech that he delivered to that body in Geneva on June 30, 1936, according to Encyclopædia Britannica.

With the advent of World War II, he secured British assistance in forming an army of Ethiopian exiles in the Sudan. British and Ethiopian forces invaded Ethiopia in January 1941 and recaptured Addis Ababa several months later. 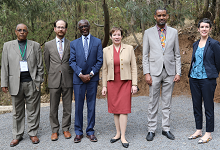