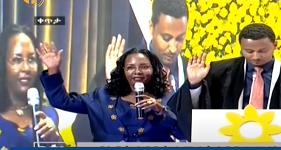 The Addis Ababa City Council today appointed Adanech Abebe to serve as the Mayor of the capital of Ethiopia for the coming five years.

She sworn in as Mayor his morning during the first general assembly of the new Administration. Adanech Abebe has been serving as Deputy Mayor (Acting Mayor) of Addis Ababa City for the past few years.

Her appointment came following the Prosperity Party won the general election of the country held last June. Her profile shows that Adanech has served in many government positions mainly in Oromia Region including serving as Mayor of Adama City.

In addition, before becoming Deputy Mayor of Addis Ababa, she has also served as Minister at the Ministry of Revenue, where she managed to boost the country’s annual revenue by about one billion US dollars in 2018.

Adanech has been one of the active change agents within the team of Prime Minister Abiy Ahmed, who came to power in April 2018 following the popular political unrest that forced the former Prime Minister Hailemariam Desalegn to resign.

Over the past few days, different regions of Ethiopia including Oromia Region have held their inaugural meeting establishing new government electing their leaders. The Oromia Regional Government, which held its first meeting last week has also elected Shimelis Abdissa to continue serving as President of the region for the coming five years.

Other regions of Ethiopia are also expected to hold their inaugural meetings and elect their leaders in the coming days. The Ethiopian Parliament is set to hold its inaugural meeting early next week forming the new government led by Prosperity Party.