The discussion involves strengthening the long-standing ties between the two nations and collaborations on sugar sector development and health sector, among others. Saying Cuba is a special friend of Ethiopia, President Sahle-Work emphasized the priority of focusing on activities that would help to expand the longstanding and historical relations.

Mesa on his part expressed the utmost interest of his country to expedite the relationship between Ethiopia and Cuba, according to office of the President. About 28 Cuban collaborators are currently working in Ethiopia, 22 of them in health institutions and another six in the educational system, as part of Cuba’s professional assistance to African nations.

Around 5,000 Ethiopians who studied in Cuba at different educational levels, are contributing to the economic and social development of their country, thank the Cuban people and State that welcomed them as their children, and they are the backbone of solidarity with Cuba in Ethiopia.

The deligation led by the First Vice President is also expected to meet African Union offcials in Addis Ababa and extending the vist to South Africa to attend the swearing-in ceremony of Cyril Ramaphosa as President of South Africa, and the trip to the Kingdom of Eswatini, former Swaziland.
Source- Walta and FBC. 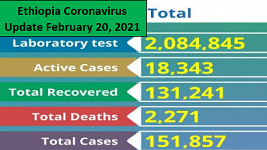