By Col. Jamal Ahmed [OPINION] – Last night on the state broadcaster, Ethiopian Television, I saw an commercial kind of short drama sponsored by a certain agency established to fight financial crimes in Ethiopia. It was about how people are engaged in money laundering and setup legal businesses using stolen cash and their relatives.

At the end of the drama, it is stated that there is a law in Ethiopia which will make accountable the people who directly or indirectly are engaged in corruption / theft and money laundering. As I was told later this commercial drama has been on air for several months.

And I asked myself, why the heck the agency is sponsoring this drama when there are thousands of real cases, if not tens of thousands, are already being observed across the nation?

Is the agency trying to teach us that stealing and engaging in money laundering is illegal to the people who forced the regime to launch reform as a result of such systematically executed theft and wealth transfer?

Or is it inviting whistle-blowers to report about such incidents as if the agency doesn’t know who is stealing the wealth of the country? Or is it telling the thieves to sell the stolen asset and stash the money abroad before the agency comes after them?

Hmmm…I am lost here… In a country where we see everyday people becoming millionaires out of the blue, this drama doesn’t make sense at all.

Whatever the intention of the commercial may be, in recent years Ethiopia’s name has been frequently mentioned in relation to corruption and money laundering and illicit financial outflows.

The 2015 report by the High Level Panel on Illicit Financial  Flows from Africa states that Ethiopia has lost $16.5 billion from 1970 to 2008, making it one of the top ten

African countries by cumulative illicit financial flows. This estimate is likely to be much higher if money lost due to corruption and other criminal activities is also considered.

Recent reports by international organizations such as Transparency International and Global Financial Integrity show that the scale of corruption and severity of money laundering in Ethiopia is worsening.

In fact that is one of the major reasons the country is today short of cash and hard currency. That is what forced the regime to announce its plan to sell Ethiopian Airlines, Ethio Telecom, Ethiopian Shipping Lines and Ethiopian Electric Power Corporation, among others.

Neither the dram will not stop the people who still are engaged in corruption and money laundering, nor does it help the Ethiopian people recover their stolen money back.

In my view the agency doesn’t need a whistle-blower to track and find the corrupt people and those engaged in money laundering. Or teach the people who already are tired of the evil practices.

It is everywhere around us.

Please don’t waste our time and your budget on this nonsense drama. We know all about it and I bet you (the Agency also know the thieves more than we do.

Now, if you have the mandates go after these thieves / corrupt minded people and recover the asset of the nation and people.

Just follow the asset / the business, then you will get the real owner. As simple as that!

Mr. / Mrs. Agency, you may for instance launch at asset audit and recovery on the flourishing buildings / villas in Addis Ababa instead of spending your budget on nonsense drama.

Go and find out who the real owners are and how the money end up there. When you take these thieves to court and recover the asset of the nation, it will be on the news and we can learn from those thousands of real cases.

The Agency can start by asking simple questions such as:

I guess asking at least those simple questions can easily help the Agency to find out whether that building belongs to one of the tens of thousands out of the blue millionaires.

I think such investigations will not only help the country and the people of Ethiopia to recover their stolen money, but also teaches a lot than the drama.

When you [the agency] done with the buildings in Addis Ababa if you complete that in few years, go after other businesses – check out how those car importers are importing and selling the vehicles without the money touching the banks, then go after those who abuse duty free privileges such as, selling tax free imported factory inputs, construction materials, etc…

But please, stop sponsoring that drama. We need to hear from real cases, which are more powerful to teach or warn us from engaging in such evil practices – stealing the wealth of the nation / the people.

So, Mr. / Mrs. Agency would you please go out there and do your job. When you do your job we will see how many people you took to court and how much of our stolen money you captured. I think that one will teach us more than the drama!

For me and many Ethiopians, who knows what is going on in their neighborhoods but don’t come to your office and tell you in public who is doing what, sponsoring drama on corruption and money laundering is nonsense. Don’t you think? 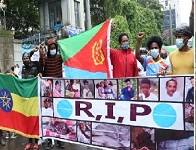