BY ANDUALEM SISAY GESSESSE – In recent months the controversy between Egypt and Ethiopia over the mega dam being built by the latter has been getting attention of international media outlets. As Ethiopia vowed to start filling water the dam in the coming rainy season – July, Egypt politicians began seeking political support across the world claiming that lives of its millions of farmers will be at risk.

From the Arab Leagues to the United Nations, Egypt has submitted its petition ignoring the legal process and preferring political solutions from external forces, which have nothing to do with the issue. But what does the Nile River means to Egypt, Ethiopia and the Sudan? Why is Egypt crying outlook and is its claim to monopoly use the water of the River Nile morally and legally acceptable? Let’s see some facts first.

Ethiopia and Egypt have a long history and relations. In the olden days, the Ethiopian Orthodox Church used to get its Patriarch from Egypt. But most of all the two countries are bonded by one of the longest river in the world – the Nile River, which originates from Ethiopia. Egypt is considered as the gift of the Nile because the water is critical for its economy. From irrigation, to tourism, fishery and electricity, among others, for centuries Egypt has been using the Nile water that flows through Sudan.

Likewise, Sudan has also been using the Nile water for irrigation, fishery, tourism and electricity before the water reaches Egypt and finally end up in the Mediterranean Sea traveling over 6,000 kilometres.

Meanwhile, Ethiopia, which contributes 86 percent of the water for the River Nile, has not been able to utilize the water so far. As a result, Ethiopia used to be known as one of the poorest country in the world with millions of farmers suffering from frequent drought and famine. The reason for Ethiopia not to be able to use the Nile River was mainly because the country was poor and donors were reluctant or influenced by Egypt not fund Ethiopia’s projects on the River Nile, known as Abay River in Ethiopia, and Blue Nile in Sudan.

But nine years ago, Ethiopia announced its plan to build the largest hydroelectric dam in Africa – Great Ethiopian Renaissance Dam (GERD), which will generate about 5,000 Megawatts of electricity. The country vowed to fully fund the construction of the $4.5 billion mega dam.

Points of disagreements between Ethiopia and Egypt

But the news was not welcomed by Egyptian politicians. Some of their politicians in fact urged their government to launch war against Ethiopia. This is mainly because Egypt has been considering the River Nile as its sole proprietorship. In fact the country has written in its constitution that the government has to protect “the historical right” over the Nile River. Ethiopia, Sudan and Egypt have never signed a deal that governs the cross boundary Nile River.

Meanwhile, often Egyptian politicians refer to the 1929 and 1958 treaty with the Sudan that shared the whole water of the Nile River between Sudan and Egypt as legally binding to sustain their monopoly over the Nile water.

Ethiopia as a sovereign nation on the other hand argues that the country is not part of those treaties and have the “natural right and legal” to develop my natural resources without significantly harming the use of other River Nile Riparian countries.

For that Ethiopia has been inviting politicians from both Sudan and Egypt to visit the construction of GERD and explaining its benefit for its people and for the downstream countries by regulating the water flow of the Nile, which has been taking huge amount of fertile soil from Ethiopia and flooding power plants and farms mainly in Sudan.

Even though the Nile Riparian countries are nine African nations, Ethiopia, Sudan and Egypt are the major in terms of water contribution and utilization so far. The construction of GERD is being built at 20 kilometres distance from Sudan border is now completed 73 percent. What are the issues raised in the latest negotiations facilitated by the United Sates and held in Washington D.C.?

One of the major topic Egypt and Ethiopia failed to agree on is water filling period of GERD. Disregarding what happens to the downstream countries, whose population’s life is dependent on the water of the River Nile, Ethiopia can fill its 74 billion cubic meter capacity dam within two years.
But with the intention of avoiding significance harm to the downstream countries, Ethiopia proposed to fill the dam gradually in four years.

This offer of Ethiopia will cost the country at least $2 billion dollars directly, which it could have secured from exporting power had the dam been filled water in two years’ time. Delaying the filling of the water by two years means also denying the several millions of Ethiopian farmers from accessing electricity and health facilities with power in their neighborhoods.

Egypt on the contrary suggested that Ethiopia has to fill GERD in long term from 12 years to 20 years, which literally makes the turbines out of service. Egypt has also suggested to open office near the GERD in Ethiopia to monitor the water flow, which is a violation of the autonomy and sovereignty of the nation, which Egypt has failed centuries ago to control the source of the Nile with waging war on Ethiopia.

In my view these two propositions of Egypt alone means Ethiopia doesn’t need GERD or should not use the water and reduce the water volume it is currently getting from the River Nile. I think Egypt wants to continue handing out rice donation that is grown by the water to Ethiopian farmers after drought of every three years.

One of the arguments I often from Egypt side is that Ethiopia has other option while Egypt is only reliant on the Nile water. The fact is only 7 percent of Ethiopia’s land is covered with rivers and lakes. Some of these lakes such as Haromaya Lake have completely dried, while others are declining their water volume due to climate change. We shouldn’t also forget that some of the rivers are also feeding the River Nile.
For me this is like interfering in the internal affairs of another country. One cannot decide or prescribe which natural resource or development model the other has to use.

Yes it is true that when Ethiopia fills water GERD, Egypt cannot expect to get equal amount of water it used now gets. This is the same as the volume of the water Egypt gets declines whenever there is drought in Ethiopia. So trying to put figure such as getting every year some 58 billion cubic meters of, which Egypt needs to keep running the Aswan Dam, cannot be realistic and selfish. Egyptian politicians needs to accept the fact that like Egyptians, who have almost 100 percent access to electricity, 56 percent Ethiopians who are now living in the darkness deserve to have electricity.

They have to accept that it is morally and legally acceptable for Ethiopians to use some of the water of the River Nile for electricity, fishery, tourism and irrigation to feed themselves.

I think it is time for Ethiopian politicians to say “enough is enough! No more rice aid from Egypt! Let Ethiopian farmers use some of the Nile water and feed themselves, get electricity and health services, among others. I don’t know about them, as a journalist I am tired of reporting food aid appeal of Ethiopian government after every drought. I am sure our politicians are also tired and ashamed of begging for rice or wheat.

Drought is not a result of curse and the like it is mostly the result of climate change. If tens millions of farmers in Ethiopia, who live along the river streams that flow into the Nile River, continue to cut trees in order to meet their daily energy needs, drought is imminent. Then the drought will lead to reduction of the volume of the River Nile.

Egyptian politicians must know that the decline of the water flow of the Nile River is directly related to this. So, it is mandatory for all Egyptians, Sudanese and Ethiopians to be engaged aggressively in conservation activities around the river streams that contribute to the Nile River to make its flow of sustainable and predictable.

Egyptian politicians should also need to stop trying to put political pressure on Ethiopia using countries like the United Sates, the World Bank or the United Nations. Referring history of Ethiopia may help them to understand, how their ancestors’ attempts to control the source of the Nile invading Ethiopia or indirectly have failed many times.

So the reason Egypt monopolized the use of the Nile River water for centuries is not because of its power as was defeated many times by Ethiopians. The reason it maintains its monopoly over the water usage is because Ethiopians are either not interested or had no enough resource or perhaps was not their priority to invest in grand projects that benefits their millions of people like that of GERD. Today is a different era, the old sabotage and trying to influence donors or the international community against Ethiopia’s effort to develop its natural resources won’t be be realistic any more. The way forward is nothing but cooperation!

As I suggested couple of times on Al Jazeera Arabic service a few time recently, the solution should come from the three countries Ethiopia, Sudan and Egypt. One has to put itself in the shoes of the other in order to feel the pain and understand the rights of others to live. Bluffing about going to war won’t help any of these poor nations, unless they want to help the world’s top weapon producers make money out of their fight.

Instead of talking about retaining the current water share the three countries – Egypt, Ethiopia and Sudan – need to invest on how to maximize the water flow by reducing evaporation, shifting from huge water consuming crops production like Egypt’s rice farms, to less water consuming agriculture and planting trees around the Nile River gorges and every river stream that contributes to the River Nile.

Now that all the three countries have agreed to re initiate the talk. So the solution is to cooperate, talk honestly avoiding any third party interference and come to a mutually beneficial win-win solution. 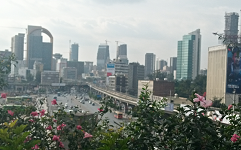 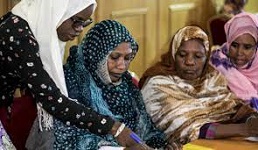 Salute to the resilient Sahelian women 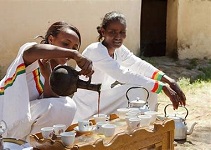 Why coffee has to be Ethiopia’s brand