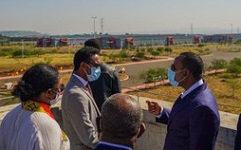 The Government of Ethiopia on Wednesday inaugurated its 13th industrial park in the capital of Amhara region, Bahir Dar City.

Built on 75 hectares of land Bahir Dar Industrial Park is inaugurated in the presence of Prime Minister Abiy Ahmed of Ethiopia. It is indicated that eight sheds are already built within the Park, and second phase of the construction will be done on 125 hectares.

“Enhancing the manufacturing sector is one of the key pillars of our Home Grown Economic Reform unveiled in 2019. Hence the expansion of such parks will facilitate our industrial development goals together with the enabling environment we are working to create for investments,“ Prime Minister Abiy twitted after attending the inauguration.

When it goes fully operational, Bahir Dar Industrial Park is expected to create some 20,000 jobs. So far the operational industrial parks in Ethiopia including the privately owned, have created jobs for about 75,000 workers, according to the latest report of Ethiopian Investment Commission.