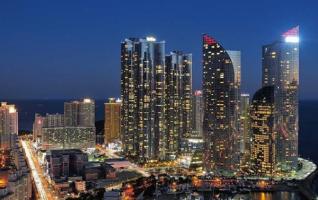 The African Development bank and Korea’s Busan Metropolitan city urged Korean investors to speed the development of Africa by investing more in the continent.

The call was made at the Korea-Africa Business Forum held at Busan Exhibition & Convention Center on last week, supported by Korean Ministry of Strategy and Finance.

The AfDB mission led by the Vice President for Finance, Charles Boamah and the Executive Director for Canada, China, Korea, Kuwait and Turkey, Hau Sing TSE, provided information on investment, procurement and recruitments at the Bank during two-day forum.

Boamah encouraged Koreans to join the Bank and to support Africa with Korea’s experience and technology. “We welcome South Korea’s private sector to work with us to bring the capital, technology and entrepreneurial skills to Africa’s youth, to spur the next generation of entrepreneurs,” he said.

For his part, Executive Director Tse who is also Dean of the Board, also  emphasized the need for the Korean private sector to participate in African businesses.

The panel discussion was moderated by Ambassador Kim Il-soo, Executive Director of Korea-Africa Center, with the ambassadors of Angola, Kenya and Ethiopia to Korea in attendance.

The Bank’s team held a special meeting with African beneficiaries of the KOAFEC Next African Leader Program scholarships, currently studying for Masters Degrees in ICT run by Korea Advanced Institute of Science and Technology (KAIST), (established in 2010 by the AfDB-KOAFEC Trust Fund).

Cultural events were held on the last day with the participation of African People’s Association in Busan. These included a fashion show of African attires, cultural dances and music. The Busan Foundation for International Cooperation (BFIC) organized a photo exhibition.

The forum, hosted by Kim Young-whan, Vice Mayor of Busan City, and Song In-chang, Deputy Minister of Strategy and Finance attracted more than 600 participants. The event Foreshadowed the Bank’s 53rd Annual General Meetings to be held in Busan from 21-25, May 2018.