European Union Business Forum (EUBFE) has pledged to help Ethiopia to become a global investment hub and create conducive investment climate, according to Ministry of Finance.

During the meeting, the two sides are ready to work for a favorable investment climate in Ethiopia through the joint forum. EUBFE representatives have also pledged to help Ethiopia to become an ideal investment destination and regular talks will be held with the Ministry of Finance to achieve this goal.

Finance Minister Ahmed Shide said on his part Ethiopia attaches great importance to its cooperation with the European Union and other European countries. He further stated that Ethiopia is committed to working closely with the EUBFE and having a consultative meeting at least twice a year for the benefit of both parties.

Speaking on the ongoing economic reform that Ethiopia has embarked on, Ahmed noted that the reforms are being intensified and the government is committed to increasing the participation of the private sector in the reform process.

He stated the recent involvement of private sectors as well as foreign companies with strong experience and potential in the telecom sector of the country as a showcase of the government’s commitment in this regard.

The Minister told the delegates that essential efforts will be made by the Ministry of Finance to ease all forms of bottlenecks that faced EUBFE member companies in their day-to-day activities in Ethiopia. (The Ethiopian Herald) 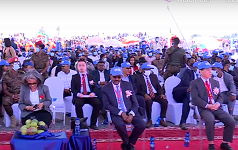 Get ready to rise with horizon on beach