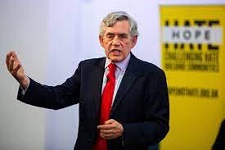 The World Health Organization today announced the appointment of The Rt Hon Gordon Brown, former Prime Minister of the United Kingdom, as WHO Ambassador for Global Health Financing.

Mr Brown is widely credited with preventing a second Great Depression through his stewardship of the 2009 London G20 summit. He mobilized world leaders to commit an additional $1.1 trillion to restore credit, growth and jobs to help the world economy through the global financial crisis.

More recently, Mr Brown has tirelessly called on wealthy nations as well as the private sector to ensure the equitable distribution of COVID-19 vaccines, advocating for a concerted global effort — rooted in science and sound economics – to save lives, end the pandemic and restore livelihoods the world over.

Dr Tedros said: “I am delighted and honoured that Gordon Brown has agreed to serve as WHO Ambassador for Global Health Financing. In this role, he will elevate and support WHO’s work to raise awareness internationally on the great need for sustained global health financing, particularly from G20 and G7 countries. As a longtime friend of Gordon’s, I know that he will bring his sharp intellect, firm commitment and deep sense of justice to this Ambassadorship.”

Mr Brown said: “I have a tremendous personal regard for Dr Tedros with whom I first worked two decades ago, and I am delighted to be able to help his and WHO’s work raising global finance to ensure everyone has access to health. Our immediate task is to work together to finance the vaccination of the whole world and protect the poorest countries from the terrible effects of COVID-19 and other diseases.”

Gordon Brown is the United Nations Special Envoy for Global Education and former Prime Minister of the United Kingdom. He served as Prime Minister of the United Kingdom from 2007 to 2010 and is widely credited with preventing a second Great Depression through his stewardship of the 2009 London G20 summit. He was one of the first leaders during the global crisis to initiate calls for global financial action, while introducing a range of rescue measures in the UK.

In April 2009, he hosted the G20 Summit in London where world leaders committed to make an additional $1.1 trillion available to help the world economy through the crisis and restore credit, growth and jobs. They also pledged to strengthen financial supervision and regulation.