BY ANDUALEM SISAY GESSESSE  – Sitting on an old mattress in front of a small house in Kimukunda village in the Rakai District of southern Uganda, Teddy Nakawoeisi, 60, is waiting for her grandchildren to bring home something for supper. Between the ages of 4 and 8 years, they are at a nearby farm — working as daily labourers.

The house she now shares with her five grandchildren and one daughter was built for her by community members after she lost another daughter and the father of three of the children a few years ago. They died from what she calls “a strange disease.” Two other children were dumped on her by a drug-addicted son who is now in Kampala, the capital.

While waiting for the children, Ms. Nakawoeisi is busy attending to her daughter, who has been in bed for a long time because of the same strange disease. “I didn’t mean to be cruel to the children,” she says in Luganda, the local language, in explaining their farm work. “But as you can see, I am weak and have to take care of her at home.”

Here in Rakai, where Uganda’s first AIDS case was reported in the early 1980s, it is common to see children engaged in intensive labour activities. The children seem to have no other option to sustain themselves and their elderly family members.

According to the Ugandan Bureau of Statistics (UBOS), in 2006 there were about 1.8 million children involved in child labour. According to UBOS and the International Labour Organization (ILO), these children primarily work in agriculture, fishing, transport, mining, construction, the urban informal sector, domestic service and commercial sex exploitation.

In Rakai District, children who lost their parents to AIDS or who struck out on their own for other reasons are mostly engaged in farming. They often load heavy bunches of matookes (green bananas) on trucks for the export market or work on farms, as do Ms. Nakawoeisi’s grandchildren.

“A child who does not go to school has no future,” says Alex Bagarukayo, acting labour officer in Rakai District. Meanwhile, grandparents who used to rely on their children for their daily needs now have nowhere to turn except their grandchildren.

According to an ILO-sponsored report by Bill Rau, “HIV/AIDS and Child Labour,” the pandemic has been one of several major factors contributing to child labour since the mid-1990s, based on research in South Africa, Tanzania, Zambia and Zimbabwe. And HIV/AIDS and child labour will likely remain closely linked during the first decades of this century.

To break such links, research has shown, interventions are needed to help these orphans and their close relatives, with the goal of keeping the children in school, protecting their legal and human rights and meeting their emotional needs.

Several non-governmental organizations (NGOs) in Uganda are working with community groups to reduce the reliance of families on their children and to save the children from the likely negative impact of child labour on their development.

Since 2010, some 8,100 children have been taken out of child labour — or prevented from getting involved in the first place — in three districts (Rakai, Wakiso and Mbale), according to Rural Development Media and Communications, one of the partnering organizations.

“I can say that we have achieved significant change for the better,” says Kalamagi Yakub, a programme officer for the Rakai Counselors’ Association, another NGO engaged in the programme. Among other things, the association provides children with school uniforms and exercise books, introduces income-generating projects for households and educates local leaders and the community about the harmfulness of child labour exploitation.

According to Jackie Banya, a senior programme officer with the ILO’s Uganda office, such interventions have strengthened communities’ ability to address the needs of its vulnerable members. They also have “enhanced local government’s capacity for combating child labour,” he says, by helping them to raise awareness, provide training and enforce laws against child labour.

The ILO programme in Uganda is just a pilot project, with no plans at this point for replicating it. However, Mr. Banya says, as with any pilot project, the “best achievements will be shared with key stakeholders. It is our hope that the government will take the lead in replicating it in other districts of the country.”

Many agree that for a country like Uganda — which had 1.7 million AIDS orphans in 2010 — such small-scale interventions fall well short of the needs.

To sustain activities to abolish child labour and to support the families of the victims of AIDS, the government “has to fund the non-governmental organizations that are working with the community,” argues Timothy Mbaziira, chairperson of the Local Council III Sub-county. He notes that so far the NGOs and the local communities have been funding such activities out of their own pockets.

There is still a long way to go to fully support Ms. Nakawoeisi and other weak grandparents, get all child labourers back to school and rescue Uganda’s many other “collateral victims” of AIDS. 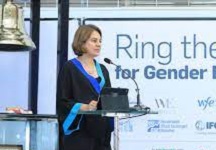