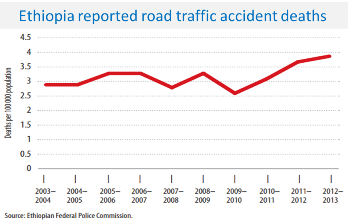 Pedestrians who fail to walk on the left side of one way road and do not properly cross using zebra lines, among others will be fined 40-80 birr (around $1.7 – $3.4), according to the federal transport authority.

The penalties who fail to implement the new regulation that will be effective as of next year, also involves community services for those who frequently fail to violate the regulation and don’t have the money to pay the penalty.

The new move by the government aims to reduce the increasing number of traffic accidents that is resulting in thousands of death of people and damages of hundreds of millions of dollars properties every year.

The new directive will be implemented across the nations. Over 3,000 people annually die due to traffic accidents in Ethiopia.

It is estimated that there are 700,000 vehicles in the country. Per capita car possession in Ethiopia stands at 3 cars per 1,000 people.

The Global Status Report on Road Safety 2015 indicated that the total number of road traffic deaths worldwide has been increasing by 1.25 million per year, with the highest road traffic fatality rates are registered in low-income countries.

In Ethiopia, the number of deaths due to traffic accidents is reported to be amongst the highest in the world.

According to the WHO, in 2013 the road crash fatality rate in Ethiopia was 4984.3 deaths per 100,000 vehicles per year, compared to 574 across sub-Saharan African countries. Besides, the number of people injured or killed in one crash in Ethiopia is about 30 times higher than that in the US.